I get emails daily asking when The Mind Thieves will be out, the second book in the Mind Readers series. Well, it’s not ready quite yet…but soon. It will be out in April, although probably toward the end of April. Here are some facts you might be interested in:

-The title is, of course, The Mind Thieves and it will be around the same length as book 1, The Mind Readers (which is only 99 cents right now on Amazon).

-There will be three books in all, and I have no idea when book 3 will be out. Sorry!

This week I’ll be at the Romantic Times conference in Chicago. If you’re there, please say hello!

“Get down!” Maddox grabbed my arm and jerked me to the oil-stained ground.

The tap of shoes on pavement echoed through the garage, barely audible over 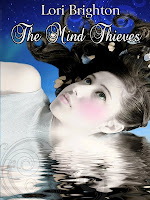 the roar of blood to my ears.

“Come out, come out,” a feminine voice sing-songed.

I knew that voice well. A shiver of unease raced over my body. Maddox’s jaw clenched and unclenched, a pulse ticking erratically at his temple. His anger was almost tangible. I didn’t need to ask him, I knew it was the woman from the plane. Cinderella had found us.

“Stay down,” he whispered.

He hunched low and moved toward the bumper. His back pressed to the car, he reached behind him, taking a pistol from a holster underneath his t-shirt.

“How’d you get on the plane with that?” I whispered.

Was he seriously going to shoot the blonde? Wouldn’t that only exacerbate the situation? Like, make us wanted for murder? I could see our mug shots now, “Wanted, for killing Cinderella.” We’d put the evil stepsisters to shame.

I looked heavenward, to the cement ceiling, rumbling overhead from cars. My heart pounded madly. It hadn’t slowed since yesterday. At this rate I was totally going to have a heart attack by the time I reached nineteen.

“Oh Maddox,” Cinderella called out. “I know you’re here. I can practically hear your mind spinning.”

Her footfalls came closer…closer. Maddox shifted ever so slightly, his thigh muscles bunching under his cargo shorts. I wanted to ask him what he was planning, but instead I bit my lower lip to keep from giving us away. Closer, those shoes tapped, so close she was almost on us. Suddenly, Maddox surged upward, pistol extended.

I braced myself against the cool metal of the car and started to stand. Before I could straighten, an arm wrapped around my neck. I was tugged to my feet, my back crushed to two perky boobs.

“You should know better.” Blondie’s melodic voice rang into my ear, but I knew she wasn’t talking to me.

“Shit,” Maddox grumbled. He lowered his arm and slowly turned to face us. He looked more annoyed than nervous. Why was he just standing there? Why wasn’t he doing the crazy ninja moves he’d used on the intruders in our cottage?

“Surprised to see you,” he said quite casually.

Seriously? Blondie might be skinny, but she had a heck of hold on my neck. If he wasn’t going to help, I would. I started to lift my elbow, intending to jab her in her flat gut when I felt the distinct press of hard metal to my temple. A gun.