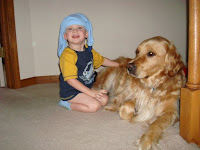 Today we had to put our dog down. He wasn’t eating and his legs kept going out. We had him for nine, wonderful years and he actually lived about as long as a Golden Retriever usually does (10-12 years). But it didn’t make it any easier. The last month or so we could tell he wasn’t feeling well, but thought it was arthritis. So, it was a bit shocking to get the news that he was full of cancerous tumors. Golden Retrievers are great at hiding pain. He never whimpered, never cried. 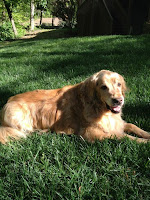 When we lived in Michigan, Jack showed up one day, tail wagging, all smiles. No one ever claimed him and so we were fortunate enough to get to adopt him. I know most people think this, but he really was the best dog. So kind and loving. All he wanted to do was be with the family. He adored hiking and swimming in lakes. When my son was a toddler, he would crawl all over Jack, pull his ears and tail, but Jack wouldn’t even flinch. I’ve never much considered myself a dog person, but Jack wasn’t like most dogs. Jack was more human than pet. You could see the soul in his eyes, his intelligence, his kindness. There wasn’t a person alive who didn’t love Jack.
Most days it was just me and Jack when my husband went to work and my son to school. I’d be in my office and Jack would come in as if to say hi and see what I was up to.

I really can’t believe he’s gone. No matter how many pets you lose, it never gets easier. I guess all you can do is enjoy the time you have together. So Goodbye Jack, you will be greatly missed.