I have to admit, I’ve been in a rut with this second book. Although I’m enjoying it, I’m not use to having a deadline. Tell me I have to do something, and I find any reason not to. Oh yes, I’m a rebel. Shhh! Don’t tell my agent or editor!

My sil is helping me though, continually asking for the next chapter. It’s because of her that I’m 3/4s of the way done. Hooray! Only have that last suspenseful bit to finish up.

I’m taking a break right now and judging contest entries while flipping through the television. I just happened upon The Mentalist. An interesting show with a gorgeous male lead, Simon Baker. I first saw Simon Baker while watching the movie Something New and was smitten.
I know quite a few writers who use pictures of actors or models as outlines for their own characters. It was while watching Something New that I realized Simon Baker is the hero for my second Kensington book.
The hero’s name is Colin. He’s adventurous and sarcastic with a swoon worthy grin and eyes that always seem to be smiling. 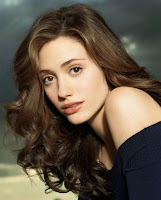 But who would play my heroine, Bea? For some reason, I keep picturing Emmy Rossum. You might know her from The Phantom of the Opera. Sophisticated, gorgeous and innocent looking.

So how about you? Do you picture actors or models when you read a book? Or do you picture someone you know? How about yourself? Do you ever place yourself in the hero or heroine’s role? Don’t worry, I won’t tell!