I haven’t mentioned much about my next release, but since I now have a cover, I thought I’d share! The cover was made by the amazing Kim Killion at Hot Damn Designs. It’s a historical romance and I’m a bit nervous because it’s the first historical romance I’ve written with no paranormal! Just straight romance! I so love the hero and heroine and hope you will too! It will be out in two to three weeks, Ebook only, unfortunately. If you’re interested in To Seduce an Earl, read the blurb below!

On the outskirts of London in a meadow of lavender, sits a house of esteemed ill repute. But this is no house geared toward pleasing men. No, this house is for women who have come to seek their own delight. And for three young ladies it’s where they’ll find something completely unexpected…true love. 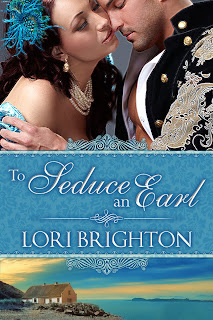 Grace Brisbane will do whatever it takes to save her dying mother, but with a stepbrother intent on gambling and drinking, their funds have run dry. What’s a girl to do when she’s left poor and destitute? Seduce an Earl, of course. Handsome and rich, the Earl of Rodrick is the perfect target. Unfortunately, Rodrick despises innocent virgins. There’s only one place where Grace can learn the secrets of seduction… Lavender Hills. The moment Grace spots Alex, the man who will teach her the ways of intimacy, she knows she must guard her heart. Alex is charming and gorgeous and completely inappropriate.

As a young man, Alex Weston is blackmailed into working at Lavender Hills in order to save his family from London ’s prisons. There could be worse ways to spend his days and nights. Still, seduction has become a chore and thoughts of freedom keep him up at night. Until he receives a new client, the sweet Grace Brisbane. He should be thinking only of his growing need to escape, instead he’s captivated by the lovely Grace. The more time they spend together, the more he realizes that their brief meetings aren’t enough. For while marriage between a lady and a whore could never happen, Alex knows in his heart that he is willing to accept nothing less.

There’s still time to enter to win 2 Medieval romances! Read the blog below to enter.