The Demon Hunter (the second book in my Ghost Hunter series) is finished and receiving the final touches! It should be out toward the end of December.

I’ve got a special treat, two actually. The first is an excerpt! Read a few pages below to see if the Demon Hunter might be your cup of tea. After reading, make sure to go to the bottom of the post for a special giveaway.

There was no doubt about it, Ellie’s life was a cosmic joke.

A bad sitcom that refused to end. And apparently nothing had changed since leaving the familiarity of the U.S. and taking a job in England. Another country, another culture… all the same. Ridiculousness followed her even across the wide expanse of the ocean. But this—this newest episode in the comedy of errors that was her life—definitely took the prize.
She thought about nudging Miranda, but decided that interrupting her coworker mid-speech would only draw unwanted attention from the small crowd before them. Best to keep everyone oblivious as long as possible. Thank God for the cloak of night.

“And some say,” Miranda said to the clueless tour, “he still haunts the place even to this very day.”

There were a few ooohs and aaahs as the visitors mulled over the possibility of the former owner haunting the estate. If they only knew what really lurked behind them, those ooohs and aaahs would turn into screams of outrage, or even worse, horrified laughter.

Miranda’s speech finished, Eloise finally nudged her in the side and gave a discreet nod toward the man stumbling through the grass behind their group. Miranda followed Eloise’s gaze, confusion marring her elegant face. Spotting the man, her almond shaped eyes widened. Ellie looked away, giving a discreet cough to cover her laughter.

“Feel free to study the statue,” Miranda blurted to the crowd, pointing at the life-sized marble icon of the former owner that stood beside them.

Holy hell, she didn’t get paid enough to deal with this. As the visitors strolled around the grounds, dipping their fingers into the fountain in the middle of the garden, their shadows barely visible against the dark background of night, Eloise leaned close to Miranda, attempting to draw the least amount of attention she could. As if the huge Victorian gowns they wore didn’t draw enough attention. Lord Templeton insisted they dress in character to make the tours more authentic.

“Miranda, I’m not seeing things, right?” It was a legitimate question, for she had, upon occasion, seen things others didn’t. Her first foster family had called her insane. Perhaps, but she’d learned to accept her insanity, which was more than she could say for most people.

Miranda shook her head, the dark, silky bun at the back of her neck falling into a lopsided donut. “Nope. That’s one naked arse of a man.”

Ellie pulled the straw bonnet from her head and tossed it to the iron bench nestled between two yews. “Probably hazing from the university.”

Ellie wasn’t sure if she should laugh or cry. She resigned herself to sighing long and loud, thankful that their small tour of five was focused on the statue and hadn’t noticed the man stumbling around like a naked mole rat that had seen too much light.

As if she hadn’t enough to deal with. Lord Templeton was making veiled threats to send her back to America, refusing to renew her work visa. The old grump didn’t care for her “Pollyanna” attitude, as he’d called it. Apparently he expected her to be dour and bitter, like him. Perhaps she was overly positive, but when one had been through what she had, it was either curl up and cry, or laugh. She chose to laugh. But laughing now would certainly not help matters. No man liked to be laughed at, and certainly not when he was naked.

“What should we do? Call the police?” Miranda asked with a casual disinterest that said they’d experienced way too many weird things since starting work at Crestmoore Manor.

Like they needed another police record. That would make five in one month. Just last week they’d had to call the cops because two women had gotten into a cat fight, claws and all, over whether ghosts were real or not.

Of course it had been her fault because she couldn’t control the crowds. It didn’t matter that it had been her idea to add the evening ghost tours to the house museum, doubling Lord Templeton’s pathetic income. According to Lord Templeton, they hadn’t had any mischief until Ellie had started work here. Yep, she was a troublemaker. Sadly, it wasn’t the first time she’d heard the word used to describe her.

Their naked intruder stumbled into a patch of moonlight, the eerie blue highlighting his body with a magical glow. Ellie stiffened, for a moment unable to breathe. No, not just a naked man, a hot naked man. So hot that she forgot her train of thought. Forgot everything around her, including their tour group.

Tall, blond, Nordic almost. He was like some Viking lost in time. Perhaps he was.
The man stumbled into the shadows, losing balance and falling into a yew tree.
Eloise cringed.

“Yikes,” Miranda murmured, crossing her arms over her mauve bodice. “That’s going to leave some marks and it’s definitely a shame. I might be a lesbian, but even I have eyes and he is gorgeous. Absolutely looks like that guy from that vampire show.”

She sure as hell couldn’t argue with that statement. Ellie glanced back to make sure the tour group was still enthralled with the small rose garden. “You get the group to the side of the house before they notice. I’ll take him to my cottage, see if I can figure out where he’s from.”

They watched him upright himself, then spin around again, as if looking for the culprit who had pushed him. Yep, drunk all right. A typical, drunken college student. Eloise brushed back a lock of brown hair that had come loose from the bun she’d attempted. She supposed in a situation like this it was best to think rationally, but that was rather hard to do with a naked man fumbling around in front of you. Thank God thick gray clouds were currently making their way across the bright moon.

Ellie almost snorted. If Miranda had any idea of the things she’d come into contact with. One man, even if he was rather tall and muscled, didn’t frighten her. “I’ll be fine, but if I’m not back in five, call the cops.”

Miranda winked. “Or I’ll just assume he’s even better looking close up. If the cottage is a-rocking…”

She rolled her eyes. “Miranda Chin, he might be hot, but I’m not that desperate.”
Miranda raised a dark brow, giving Ellie a dubious glance. Her friend had made it clear upon many occasions that Ellie needed to get out more… date… get laid. But it didn’t matter how annoyingly blunt Miranda could be, nor did it matter that they’d only known each other for three months, Eloise still loved her like a sister.

Fortunately Miranda kept her impure thoughts to herself and instead, merely clapped her hands like a teacher attempting to gain the attention of wayward students. “All right, let’s move forward then. Hurry now.”

The crowd followed Miranda’s wide mauve skirts, oblivious to the fact that there was a naked man behind them. As the crowd faded, headed toward the side of the building and taking their murmured conversation with them, Ellie edged ever closer to her target, cringing when her green gown rustled with the movement. Sort of hard to do a sneak attack when dressed like Cinderella’s ugly stepsister. Until she knew otherwise, she’d treat him like a wild animal… no sudden movements, keep a distance.

Her gaze traveled his lean body, appreciating the taunt muscles of his back. As he turned, ever so slightly so the moonlight hit his back, the dark shadows burst into tattoos… wings. She’d never found tattoos sexy, but these were… stunning. He was like an archangel…a fallen angel.

The intruder latched onto the branch of a yew tree and paused, his back to her. His broad shoulders rose and fell with each harsh intake of breath. Dark shadows marred his skin. Confused, she stepped even closer to get a better look. Perhaps he wasn’t drunk, maybe injured. Her annoyance shifted to concern.

She pasted on her best Pollyanna smile. “Hello, there.”

“Oh…oh wow. Okay.” She held her hand in front of her face, peeking between her splayed fingers. Crap. Miranda was right; he was hot. Really, really hot. Firm, kissable lips, square jaw, straight nose…and sweat… sweat glistening across his forehead, down his broad chest.

She cleared her throat and forced her gaze upward. “You realize you’re not wearing any clothes, by chance?”

He moved faster than she thought humanly possible. Suddenly, he was in front of her, latching onto her arm and jerking her forward. In a dizzying whirl, Ellie found her back to his chest, one of his arms around her neck, the other around her waist. Stunned, she didn’t dare move.

His warm breath caressed her cheek. “Who the hell are you?”

Now for the giveaway…

No book this time. I’m actually giving away a necklace and bracelet made especially for the Dem 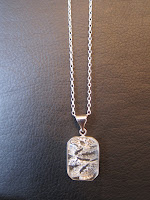 on Hunter. You’ll have to read the story to see how they relate to the book. 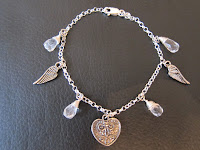 If you’d like a chance to win, just leave a comment and a way for me to get ahold of you. Overseas entries are fine. Chains are sterling silver, although pendants and charms are not.

Necklace: Chain is about 16 inches long, so sort of short. Pendant is a quartz crystal and a bit large at 1in x 3/4s in.

Bracelet: Chain is about 7 inches long.

As I said, just leave a comment. The 1 winner will be picked Thursday, Dec. 15th and receive both the bracelet and necklace.

No refunds, returns or exchanges 🙂