One of the best things about being a writer is all of the amazing authors I get to know. Jackie Ivie is one such author I consider a friend. She’s super sweet and interesting and she can write a book in a ridiculously fast amount of time.

Join me in welcoming Jackie to the blog!

Can you tell us a little about your books?

I write historical romance and feature Hot Highland Hunks! I get to write the large brawny muscled Highland men in kilts, and the women who adore them. There is nothing better!

I didn’t really know what I wanted to be for years. I’m what they call a Renaissance woman. I can do all kinds of things well. I draw, paint, play five musical instruments, act, sing, do needlecrafts…you name it…. But writing as always been my absolute love! I was super-reader in my teens and early 20’s. I’d buy just about everything that came out. The bookstore in Rawlins Wyoming used to call me on Tuesdays at my day job and read me the back blurbs, and then set aside the ones I’d select to pick up on payday. Wow. And then one day, I decided to write. I totally remember it. November 10, 1982. That was a long time ago. I thought it wouldn’t be so hard to write a book. (I had 9 written before one got picked up) And it took me 22 years to get published!!!

I used to manage a postal station before I retired. Every Thursday at 8:30 we’d get on the intercom and call the crew together for a safety talk. I made the announcement and then as they were gathering the phone rang. It was my agent. She asked if I could talk. I replied – “for you, yes.” – I handed the safety talk to my supervisor to start. And then my agent told me that Kensington Publishing had called her to offer for my book. I asked “Isn’t that Zebra Books?’ And when she said yes, I told her I needed to sit down now. I was shaking. And then when I 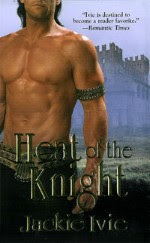 finished the call I shouted a big “Whoop!” but I forgot they were in the middle of a safety talk.

Heck yes! I read prodigious amounts of non-fiction for research. I take DVD classes on history. I play piano, cello, violin, viola and bass. Right now, I have a piano and cello. I am a cross-stitch addict. Totally. I told my husband that for every picture I finish, I’m starting three more. (I have so many projects I’m embarrassed). I crochet a lot. I have afghans all over the house on all the sofas and chairs, and lap blankets everywhere. I don’t knit very much because I’m afraid of the needles. (go figure). I draw occasionally. I don’t really like drawing, but I have all the materials in the event I want to start one. And I write. All the time in my head. Sometimes I even sit at the computer and type it out.

Tell us something about yourself we can’t find on t I used to play first base for the Harley Davidson soft ball team in Green River Wyoming. We took the state tournament (class D) in 1995. It’s fun, a great way to stay in shape!

www.jackieivie.com
I love to hear from readers!

My next book is A KNIGHT AND WHITE SATIN. I absolutely LOVE this story! I wrote it in ten days in January 2009, and mailed it in. I was bundled up in blankets and had a heating pad on my lap to put my hands in to keep them warm enough to type. Alaska in January is a very cold dark place. Trust me. I’ve got the cover on my site (and it’s all over the web), but I’ll put a short excerpt here):

Rest was not on Payton’s mind when he entered the chamber, setting her on her fe 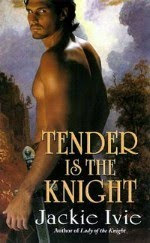 et before he turned and dropped the bolt down. And then he was moving to the adjoining door to her assigned bedchamber and slamming a bolt down on it as well. She giggled when he went to the slit of a window, before shaking his head. He’d obviously decided it wasn’t wide enough to allow entry.

“You. And this….this.” She couldn’t define or describe it, so she let her voice trail off.

“Safety measures?” he asked. She giggled again. “What is so blasted amusing?”

“This lust that the lasses have for you. That.”

Dallis put a hand over her mouth to stifle the amusement that time. “You fostered it, though. Worked at it. Created it. And now you seek to deny it?”

“I dinna’ make one of those lasses lust for me. Na’ one!” Dallis replied with a huff through her open lips, making it a low sound. It was doubt and disavowal, and she hoped he recognized it as such.

“You saying those I want lasses lusting for me?” 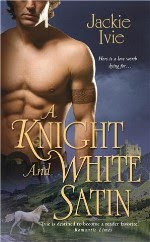 “You’re saying more than a word. You’re arguing with me.”

“Give me your wrist band.” She commanded him.

He pulled back slightly and stared at her. “Why?”

“Because these lasses are lusting for a reason, withal this argument. I’ve a desire to ken why. Now, hand over the band.”

He made a move as if to pull one of his silver bands off. Then stopped. “What will I get if I do?” he asked.

Dallis pursed her lips, rocked slightly as if considering, and then tilted her head. “What do you want?”

“For one band? I think you over-estimate your charm.”

He grinned at that, and toyed wi 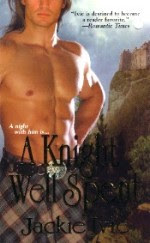 th the band, rotating it so the firelight could flicker all about it. “How about both of them?” he asked. “And the sporran.”

“For a headdress? This is too much. Add more.”

“The headdress has a veiling. That is included.” “Will you also unbind your hair?”

“Because I love the color…and I want it caressing me...swirling about me. Like a cloud.” His voice lowered nearly a full octave and her heart made the same move.

“Who said anything about caresses?” she asked in an argumentative tone.

“You wish to see what they lust after…or na’?” he asked.

A special thanks to Jackie for stopping by! Remember to leave a comment and email addy. One person will win a copy of A KNIGHT WELL SPENT. Winner announced on Tuesday!