I met Allegra Gray through our Kensington loop. She’s sweet, kind and has led the sort of life one could write a book about. Read the blurb and you’ll see why people are praising her debut romance! And when you’re done reading, leave a comment for your chance to win the book!

IT ALL STARTS WITH AN INNOCENT PROPOSITION

When her father dies, leaving her penniless and without prospects, Elizabeth Medford is faced with a horrible future: marriage to the utterly vile Harold Wetherby. Her family thinks he’s a brilliant choice, but Elizabeth has witnessed Wetherby’s cruel nature and knows a life with him would be a miserable one. If only he didn’t want to marry her…but for that to be the case, she would have to have a damaged reputation, and despite her father’s missteps, Elizabeth’s own name is pristine among society. So far…

BUT INNOCENCE IS IN THE EYE OF THE BEHOLDER

A brilliant plan is hatched: Elizabeth will organize her own ruin and escape the betrothal, leaving her old life behind. The only hitch is the man she hopes will do the ruining–the irresistible Alex Bainbridge, Duke of Beaufort. But he has secrets of his own that make Elizabeth Medford a woman he should avoid at all costs–for both their sakes. He insists he will have no part in her crazy scheme…no matter how tempting she may be…

Join me in welcoming Allegra to the blog!

I’ve loved stories from the time I was small–both reading and writing them. I wrote stories (in addition to all sorts of oth 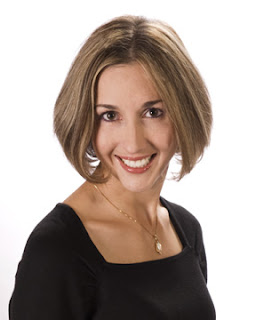 er creative pursuits like music and art) all through elementary, middle, and high school, then at age 17 decided to take a 180 degree turn and went off to the Air Force Academy. While this did mean the storytelling got shoved to the back burner for a while, my years in the military offered up some amazing experiences.

Still, I couldn’t keep the creative urge stifled forever. A few years ago I started writing again, and started seriously thinking what it would be like to walk into a bookstore and see one of MY stories on the shelf. And once that dream took hold, there was no shaking it. I’m a “there’s no time like the present” kind of person, so in spite of having young children, a full time job, and going through a divorce in the past few years, I kept working toward that dream…and it came true!

How long did it take for you to get published?

Nothing But Scandal was my second full manuscript. I think it took about 4 years from starting the first to selling the second, then another 11 months to actually see it on the shelves.

I wish I could say it came out of the blue, but that’s not exactly true. My lovely agent had sent it to an editor at Kensington who’d indicated she really liked it, but thought a couple scenes needed tweaking. Having worked feverishly to make those changes (which did strengthen the book), we resubmitted. So there was no guarantee, but I sure hoped she’d love it this time!

I was actually attending a conference for my other job when “the call” came…so it went to voicemail. During a break I called my agent back…and got her voicemail.

Finally, on the third try we connected, and she told me the happy news!

Does “haphazard” count as a schedule? I usually write in the evenings (but not every day), and on weekends if the kids are with their dad (though if it’s ski season, I have a hard time keeping my butt in a chair!).

I work well with deadlines, so although the first manuscript or two took over a year each, I’ve gotten faster. My first contract was for two books, and the second was finished in 10 months. I’ve begun a third, and I’m hoping to do that even a little faster.

You’ve been in the military, you were a College professor, and you’re a mom, which was has been most terrifying? Just kidding. How have these careers influenced your writing, if at all?

Being a mom. Unquestionably the most terrifying. Being in the military helped instill discipline and professionalism (though I honestly credit my mom for giving me most of that to begin with!). And it was actually the military who sent me off to get a graduate degree in, of all things, English, which led to me teaching at the U.S. Air Force Academy and later the University of Colorado at Colorado Springs. I loved grad school…getting to immerse myself in intelligent discussions about literature was GREAT!

And yeah, after a couple years I realized I didn’t want to just teach books, I wanted to write them. So although it seems like I’ve had several careers already, they’re all linked in a way.

(Well, I guess being a mom isn’t linked to the other careers, exactly, but I DO hope that by following my dreams and showing my kids what hard work can do, it will inspire them to follow their own dreams).

You recently did your first book signing, how did that go?

Awesome! I have such great friends, family, and colleagues. Many of my fellow romance writers and day job coworkers turned out in droves. I sold out in just under an hour!

The event coordinator at my local Barnes and Noble was pleasantly surprised. She was also very helpful, and made sure I had posters up, several stacks of books, and was right at the front of the store.

It was a lot of work to promote ahead of time and do my best to get that sort of turn-out, but it was SO worth it!

Learn everything you can (and if you’re very new, realize that there’s plenty of mediocre or even worthless advice out there, and even some of the good advice may not be what works best for you…you just have to keep an open, fertile mind…take it all in, then decide for yourself). Learn good grammar and writing skills, learn about the industry, research your topics. I am still learning every day.

Also, don’t wait. Don’t wait until you think you’ve learned it all (none of us ever will), don’t wait until it’s a “convenient” time in your life to take writing seriously (there will always be other priorities competing for your time), and don’t wait to get out there and give it your all.

Lastly, be gracious and friendly. Make it your quest to help others succeed as well as yourself, and you will find a groundswell of positive energy to help carry you forward. 🙂

Ooh, fun question! Now that Nothing But Scandal has been out a few weeks, I’ve been getting emails asking “do Beatrice or Charity get their own stories?” (These are two key secondary characters in my debut novel). The answer is yes.

I’ve finished writing Bea’s story, which will come out next summer. It’s tentatively titled Nothing But Deception. It picks up on the story of Lady Beatrice Pullington, a young widow who was the heroine’s best friend in Nothing But Scandal. She’s experienced marriage but never love, and she finds her respectable, steady life turned upside down when she falls headfirst for a visiting French artist. When she accidentally intercepts and deciphers a message that may implicate her would-be lover in a plot to steal British military secrets and deli 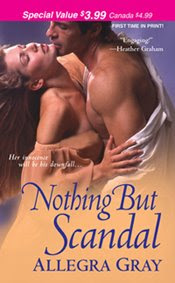 ver them to Napoleon, Bea is torn between her growing love and her loyalty to her country. The only hope to reconcile her torn loyalties? A little spying of her own.

And now, I’m working on Charity’s story. And can I just say…I LOVE CHARITY! I’ve been waiting to work with her ever since writing the first one, but she had some maturing to do, some life experiences to gain… She sure is ready now.

Check out http://www.allegragray.com/ for my latest news, appearances, contests, etc.

What do you do when you’re not writing? Any Hobbies?

Skiing and hiking (I live in Colorado)! Yoga. And shoes. Can shoes count as a hobby? I really love shoes…my little 3 yr old princess has inherited this love, which I may regret as she gets older.

Thanks to Allegra for stopping by!
Remember to leave a comment and email addy. One person will win a copy of Allegra’s debut release! Come back tuesday for the winner!