I met Edie Ramer years back at a writer’s conference. It was the first conference I attended and she was one of the few people who talked to me. This year I had the pleasure of seeing her, albeit briefly, at this year’s RWA Conference. She was just as sweet as I’d remembered. Edie is also the person who first told me about the benefits of self publishing and now she has a book of her own that has hit the virtual shelves!

Join me in welcoming Edie to the blog!

Tell us a little about your book.

nks for having me here today! It’s fun being the guest author on someone else’s blog. 🙂 Here’s the blurb:

It’s all in the Cattitude…

After Belle the cat switches bodies with a psychic on the run from a murderer, she wants her perfect cat body back instead of this furless human one. But she doesn’t count on falling in love with her former owner. Or that a CEO and a beauty queen want to use up her nine lives. Now is her chance to prove anything a human can do, a cat can do better.

I started writing in the 1990’s and sold numerous short stories to print magazines in the mystery genre, and one to an e-magazine pub. (That was the beginning of e-pubs. I remember being very leery.) Then I switched to romance and I stopped writing short stories. They were becoming instant gratification, but my goal was always to sell in book length.

I’ve won RWA contests with 4 different books and finalled in others. I’m an American Titlve V finalist. With my last few books, my goal has been to write better with every book. I think I’ve met that goal. This is the first time I’m admitting it on the internet, but I’ve had 4 agents. I’ve come close to selling, and it’s heart-breaking and frustrating.

The rest of my road to publication will be answered in your next question. (Aha! A cliffhanger ending!)

Why did you decide to go the self-publishing route?

Two years ago, a friend, Zoe Winters, self pubbed her digital novellas on Amazon and Smashwords. I wished her well and had her as a guest blogger on Magical Musings, but I remember I thought that I’d never do the same thing. I was so sure I would sell to . My mind was fixed.

In the following couple years, I kept writing and kept getting rejections. I didn’t feel it was because of my writing. I felt that what I wrote didn’t fit with the books that were selling. My books were a little different, a little quirkier. (For some of the agents/editors. For others, I’m sure it just wasn’t right for them.)

I understand. The market is tight for editors and agents. But where does that leave me and other writers who like to write something different? As a reader, I’d like to read different books, too. I think there must be other readers like me.

About this time, I started reading J.A. Konrath’s blogs about self publishing online. Also, Dean Wesley Smith’s about the myths of publishing. These blogs and others pried opened my fixed mind. In April, I decided to self publish. It took me a couple months to finish the book I was working on. In June, I finished the book and went back to Cattitude.

The selection was easy. I had the blurb for Cattitude on my website, and people would email me and ask when it would be published. I wrote Cattitude about six years ago. My then agent couldn’t sell it. The industry had changed and there were new editors and agents I could send Cattitude to—but I didn’t want to. I wanted to publish it myself. The idea excited me.

I revised it and six writer friends read it for me. That’s a lot of readers, but I didn’t have an editor or copy editor, and I wanted it to be the best I could do. Laura Jochum created my awesome cover. Another friend formatted it for me. And now it’s on Amazon and Smashwords. 🙂

Can you give us a short excerpt of your book?

I’m happy to share. This scene happens after the body switch, when Max finds Belle on the road outside his home, sees the car in the ditch, and wants to take her to the hospital:

Belle jerked her head away from Max’s chest. Wasn’t it bad enough she was inside this human body? With these clumsy arms that didn’t propel her forward when she wanted to leap and run? With this ugly, furless skin? And now Max wanted to take her to the hospital. How could he do something so horrible?

Three years of sitting on Tory’s lap, being petted while they watched Tory’s favorite TV show, The Love Chronicles, had taught Belle what happened in hospitals. People would poke and prod her and stick her with needles. Plus, she might fall in love, lose her memory, be murdered by someone disguised as a doctor, and maybe have a baby. A human baby.

No! She was not going to let that happen.

Belle’s arms dropped from around his back. Her palms slammed into his chest and he lurched backward. The blanket slid off her shoulders and pooled around her ankles. She leaped, twisting to face the ditch and thicket of trees. The heaviness of her new body made her land with a stagger. Then she followed her feline instincts and sprang forward.

“What the hell—” Max shouted.

Belle lurched. Her human legs didn’t want to obey her. She tried to force them to move faster, but it was like wading through snow. Crouching to avoid low tree branches, she darted into the trees at a fraction of her normal speed.

This was her environment. As fast as Max was, he wouldn’t catch her unless she let him, even with his clumsy limbs. 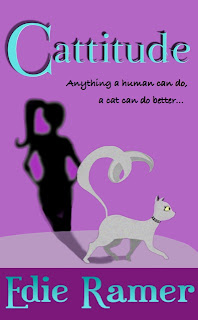 “She looks pretty damn healthy to me.” The amusement in Ted’s voice carried to Belle. “If she wants to go, let her.”

“I’m not leaving until I find her,” Max said.

I read! I read across the genres and non-fiction. And I walk my dogs. Pet my cat. Spend time with family and friends.

Lately I’ve discovered too many TV shows that I enjoy. NCIS, Bones, Castle, The Closer, Beat, Project Runway. What they all have in common is great characters. Even Project Runway. (Tim Gunn, anyone? Can you get more fabulous?)

I’m rereading my American Title V book, Dead People. It’s a paranormal romance and will be my next digital book. I hope this one will be up faster, in a month or two. After that, I plan to put up a sci fi romance, Galaxy Girls.

You can find my books here:

Amazon
I’m having an exciting release party with a fun contest starting Friday, and will announce the details on all those places. Hope to see you online!

In the meantime, feel free to ask me any questions!