I have a treat for you! A Western! Elaine Levine is known for writing steamy romantic Westerns. I know you’re excited; I am too! Reading and writing in Victorian England gets a little old, so it’s nice to read a book where danger was the law and men were so bad, they were very, very good! And remember to leave a comment because Elaine is giving away a book!

Welcome Elaine Levine to the blog!

Can you tell us a little about your newest release?

AUDREY AND THE MAVERICK is the 2nd in my on-going Men of Defiance series, about the men who settle in the town of Defiance, Dakota Territory…and the women who tame them.

We met the main characters, Audrey and Julian, in the series opener, RACHEL AND THE HIRED GUN. In the current story, Julian (Sager’s friend) is having problems at his sheep ranch. Instead of sending men to deal with the issues, he comes himself. Audrey Sheridan has snagged a corner of his mind and he cannot move on with his life until he sees her one more time.

Audrey knows Julian is trouble. She hides her foster children from him, worried they will get caught in the coming range war. But when the sheriff blackmails her to distract Julian, she soon learns she can’t ignore her own burgeoning feelings for him.

I love most eras of historical romance as a reader. But as a writer, I particularly enjoy the emotional extremes possible in a frontier setting. Life was hard, and people were reduced to their elemental truths. The strong get stronger, the weak weaker, and only the determined survive. An environment like the American West lets us see and experience a passionate thirst for life.

I never gave being a writer any thought at all until I was in college. I started writing when my son was one year old. He was 25 and my daughter 21 when I first sold. I didn’t write that whole time, and it’s kinda hard to sell when you keep quitting. But when my daughter graduated high-school and joined the Coast Guard, my husband and I were left with a quiet house and too much time on our hands. It was then that I realized the dream was still very much alive and it was time finally to make it happen.

Tell us about your call story and your first published book. 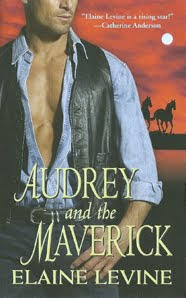 I think my call story is a little funny. My first book won the RWA Golden Heart in 2007. I pitched it to Kate Duffy at National that year. She agreed to take a look at the whole manuscript (she was requesting fulls from everyone who screwed up the courage to pitch to her). In November, I’d taken a week off work to finish AUDREY AND THE MAVERICK. On the last day of that leave, I stared at my phone, wondering if I’d ever hear from an agent or editor. To distract myself from my manic misery, I set a special ring tone on my phone for Kate (I had her business card from National). Not 10 minutes later the phone rang–without the special ring. I answered it and Kate was on the other end saying, “Elaine, Kate Duffy. This is not the call. Don’t get all excited–this is not the call.” But rather than get excited, all I could was wonder why the heck my phone hadn’t triggered the special ring!

She told me she loved my hero–loved the story, but that I had developed bad habits as a writer. And she wanted a significant change to the middle of the story. She offered to edit two chapters and wanted me to carry those types of edits through the remainder of the manuscript. She said she’d take another look at it when I was done. That was amazing to me. A busy, top-notch editor taking an interest in my work–and offering to help me–left me humbled. And now we know how sick Kate was at the time too, which makes it even more startling.

When I got the edits, I realized I had indeed picked up several bad habits, and I could see the pattern they followed. I’ll summarize them here in case it might help anyone else…

I made the changes and got the manuscript back to her early in January, and in February, she called and made an offer. I would have wanted to work with Kate for many years. I didn’t get that chance, but I will never forget her generosity.

I wish I had time for hobbies! I have a full-time job as a custom business application developer. And I’m one of the 3 founders of RomCon, the new romance reader convention being held in Denver, Colorado on July 9-11, 2010. My partners and I are working like fiends planning an extraordinary romance event for authors and fans alike! 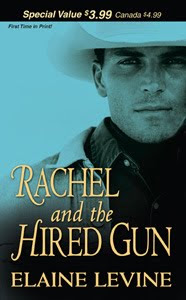 I just accepted a contract for the 3rd and 4th books in my Men of Defiance series. I’m working on the 3rd in the series, tentatively titled LEAH AND THE AVENGER. In this story, Jace Gage, friend of Julian and Sager, comes to Defiance to run the corrupt sheriff out of town. In the process, he falls in love with a violence hating, man-fearing, tomboy. Leah and Jace’s story will be available in May 2011.

Remember to leave a comment. One lucky winner will receive a copy of AUDREY AND THE MAVERICK. Winner will be announced on Wednesday!