I’ve had the pleasure of knowing H.P. Mallory for a few years now, ever since becoming critique partners through an online writing group. Since then, we’ve both written a couple books and learned greatly about the ups and downs of getting published. I wasn’t surprised when H.P. immediately landed an agent. I’d read her books and loved her writing style. She has a wonderfully sarcastic sense of humor that enriches the tone of her stories. What did shock me was when her agent ended up falling off the face of the earth, which happens way more than you’d think. I swear there’s some alternate universe where agents disappear to.

But one thing I’ve learned about H.P. (as well as many other authors, especially self-published), is that she’s not one to give up. H.P. has taken matters into her own hands. Even though her books have only been on sale for a little over a week, they’re already meeting with huge success.

Join me in welcoming H.P. to the blog!

Tell us a little about your book.

rrently I have two completed books so I’ll cut and paste a summary about both.

A self-deprecating witch with the unique ability to reanimate the dead. A dangerously handsome warlock torn between being her boss and her would-be lover. A six hundred year old English vampire with his own agenda; one that includes an appetite for witches. The Underworld in a state of chaos. Let the games begin.

Life isn’t bad for psychic Jolie Wilkins. True, she doesn’t have a love life to speak of, but she has a cute house in the suburbs of Los Angeles, a cat and a quirky best friend.

Enter Rand Balfour, a sinfully attractive warlock who insists she’s a witch and who just might turn her life upside down. Rand hires her to help him solve a mystery regarding the death of his client who also happens to be a ghost. Jolie not only uncovers the cause of the ghost’s demise but, in the process, she brings him back to life!

Word of Jolie’s incredible ability to bring back the dead spreads like wildfire, putting her at the top of the Underworld’s most wanted list. Consequently, she finds herself at the center of a custody battle between a villainous witch, a dangerous but oh-so-sexy vampire, and her warlock boss, Rand.

To Kill A Warlock:

The murder of a dark arts warlock. A shape-shifting, ravenous creature on the loose. A devilishly handsome stranger sent to investigate. Sometimes working law enforcement for the Netherworld is a real bitch.

Dulcie O’Neil is a fairy. And not the type to frolic in gardens. She’s a Regulator—a 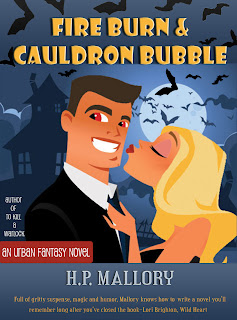 law-enforcement agent who monitors the creatures of the Netherworld to keep them from wreaking havoc in the mortal world.

When a warlock is murdered and Dulcie was the last person to see him alive, she must uncover the truth before she’s either deported back to the Netherworld, or she becomes the next victim.

Enter Knight Vander, a sinfully attractive investigator sent from the Netherworld to work the case with Dulcie. Between battling her attraction to her self-appointed partner, keeping a sadomasochistic demon in check, and fending off the advances of a sexy and powerful vampire, Dulcie’s got her hands full.

As the body count increases, Dulcie finds herself battling dark magic, reconnoitering in S&M clubs and suffering the greatest of all betrayals.

Sigh, where to begin?

Well, I wrote my first book (Fire Burn) and sent out a million queries it seemed like and I had a handful of request for the partial and the full. Then I thought I was dreaming when a major NY agent said she wanted to represent it. I thought that basically meant I was published. Haha not so. It took months and there were a few publishers who said they really liked the book but wanted this or that changed and I didn’t want to change the tone of the book. It ended up that my major NY agent dropped off the face of the earth (not just for me—for multiple clients) and I was right back where I started from.

Then I started talking to you, Lori, about self publishing and I really liked the independence of the whole thing and thought what the hey, I’ll give it a shot and here I am today.

Why did you decide to go the self-publishing route?

As I mentioned in the last question, I liked the idea of being independent—not relying on anyone to push my book.

I love the fact that my success or lack thereof is all based on me.

Can you give us a short excerpt of your book?

Sure. I’ll post the first few paragraphs from the beginning of both books. You can also go to my website and read the first chapter of each: www.urbanfantasynovels.com

Fire Burn: It’s not every day you see a ghost.

On this particular day, I’d been minding my own business, tidying up the shop for the night while listening to Girls Just Wanna Have Fun (guilty as charged). It was late—maybe nine p.m. A light bulb had burnt out in my tarot reading room a few days ago, and I still hadn’t changed it. I have a tendency to overlook the menial details of life. Now, a small red bulb fought against the otherwise pitch darkness of the room, lending it a certain macabre feel.

In search of a replacement bulb, I attempted to sort through my “if it doesn’t have a home, put it in here” box when I heard the front door open. Odd—I could’ve sworn I’d locked it.

I didn’t hear the sound of the door closing, so I put Cyndi Lauper on mute and strolled out to inquire. The streetlamps reflected through the shop windows, the glare so intense, I had to remind myself they were just lights and not some alien spacecraft come to whisk me away.

The room was empty.

Considering the possibility that someone might be hiding, I swallowed the dread climbing up my throat. Glancing around, I searched for something to protect myself with in case said breaker-and-enterer decided to attack. My eyes rested on a solitary broom standing in the corner of the Spartan room. The broom was maybe two steps from me. That might not sound like much, but my fear had me by the ankles and wouldn’t let go.

Jolie, get the damned broom. Thank God for that little internal voice of sensibility that always seems to visit at just the right time.

Freeing my feet from the fear tar, I grabbed the broom and neared my desk. It was a good place for someone to hide—well, really, the only place to hide. When it comes to furnishings, I’m a minimalist.

I jammed the broom under the desk and swept vociferously.

Nothing. The hairs on my neck stood to attention as a shiver of unease coursed through me. I couldn’t shake the feeling and after deciding no one was in the room, I persuaded myself it must’ve been kids. But kids or not, I would’ve heard the door close.

I didn’t discard the broom.

Like a breath from the arctic, a chill crept up the back of my neck.

I glanced up and there he was, floating a foot or so above me. Stunned, I took a step back, my heart beating like a frantic bird in a small cage.

To Kill A Warlock:

There was no way in hell I was looking in the mirror.

I knew it was bad when I glanced down. My stomach, if that’s what you wanted to call
it, was five times its usual size and exploded around me in a mass of jelly-like fat. To make matters worse, it was the color of overcooked peas—that certain jaundiced yellow.

I tried to give her my best “don’t piss me off” look, but I wasn’t sure my face complied.

Shit in a hat, I had no idea what my face looked like. If it was anything like my stomach, it had to be canned-pea green and covered with raised bumps. The bumps in question weren’t small like what you’d see on a toad—more like the size of dinner plates. And the texture…it was like running my finger across the tops of my teeth—jagged with valleys and mountains.

“Can you fix it?” I asked, my voice coming out monster-deep.

“Yeah, I think I can.” Sam’s voice didn’t waver which was a good sign.

I turned to avoid the sun’s rays as they broke through the window, the sunlight not
feeling too great against my boils. I glanced at Sam’s perfect sitting room, complete with a sofa, love seat, and two armchairs all in a soothing beige, the de facto color for inoffensive furniture. Better Homes and Gardens sat unattended on Sam’s coffee table—opened at an article about how beautiful drought resistant plants can be.

“You have nine eyes,” Sam said.

At least they focused as one. I couldn’t imagine having them all space cadetting out. Talk
about a headache. Turning my attention from her happy sitting room, I forced my nine eyes on her, hoping the extra seven would make my gaze all the more penetrating.

“Can you focus please?” I snapped.

Sam held her hands up. “Okay, okay. Sheesh, I guess getting changed into a gigantic
booger put you into a crappy mood.”

“Gee, you think?” My legs ached with the weight of my body. I had no idea if I
had two legs 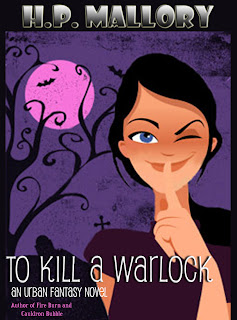 or more or maybe a stump—my stomach covered them completely. I groaned and leaned against the wall, waiting for Sam to put on her glasses and figure out how to reverse the spell. Sam was a witch and a pretty damned good one at that. I’d give her twenty minutes—then I’d be back to my old self.

“Was it Fabian who boogered you?” she asked.

“Yeah, the little bastard.” I peeled myself off the wall and noticed a long spindle of
green slime still stuck to the plaster; it reached out as if afraid to part with me.

“Ew!” Sam said, taking a step back from me. “You are so cleaning that wall.”

“Fine. Just get me back to normal. I’m going to murder Fabian when I see him again.”

Fabian was a warlock, a master of witchcraft. The little cretin hadn’t taken it well
when I’d come to his dark arts store to observe his latest truckload delivery. I knew the little rat was importing illegal potions (love potions, revenge potions, lust potions…the list went on) and it was my job to stop it. I’m a Regulator, someone who monitors the creatures of the Netherworld to ensure they’re not breaking any rules. Think law enforcement. And Fabian clearly was breaking some rule. Otherwise, he wouldn’t have turned me into a walking phlegm pile.

Well I work full time in online marketing so when I’m not writing, I’m pretty much working!
I also am the very proud mother of a 14 month old and he keeps me very busy.
So, hobbies? Um, no time for hobbies. LOL

Right now I am working on a few things—an urban fantasy series about a demon hunter, and the follow up versions to both Fire Burn and To Kill a Warlock.

Where can we purchase your books?

If you own a kindle, you can purchase them here:

Thanks to H.P. for stopping by! Remember, you can still download Kindle books onto your computer if you don’t have a Kindle. Now, for the good news…Leave a comment and one lucky person will win an e-copy of one of H.P.’s books. Winner picked Wednesday!