I’ve had the pleasure recently of chatting online with historical romance author Lisa Campbell. Not only is she super sweet, but incredibly talented. Lisa’s debut book, Superstition’s Desire, has met with great success and has been a top seller for All Romance Ebooks and Wild Horse Press.

Join me in welcoming Lisa to the blog!

Can you tell us about your debut book?

The languid days of summer are giving way to the brisk fall evenings of Northern England, as Lady Arabella stares pensively into a small fire. Doubtless, the scheme courted disaster, but she knows ’tis her only hope. Some taunt her as superstitious, whilst others condemn her for witchery, but she is unmindful of the suspicion she creates; freedom waits beyond the tree line.

Laird MacRae is a handsome devil despite the sun-bleached scar covering a portion of his face. Their instantaneous attraction is unnerving, and Connal must remind himself the woman is meant for his brother.

As they journey to Scotlan d, Connal immediately realizes Arabella’s superstitious practices are deeply held tenets. Yet, despite her heretical beliefs and his death before dishonor credo, their mutual desire spins out of control, leaving them no choice except to wed. Connal is hopeful Arabella will settle in to his household. Yet, after one week everyone is convinced their new mistress practices witchery. It seems walking in circles, and chanting while balancing a loaf of bread on one shoulder creates undo fear. And if that is not enough, Connal’s brother has begun menacing Arabella in the corridors.

Yet, something far more dangerous than desire stalks from the shadows and in a climate of treachery and betrayal, the greatest risk of all is to surrender to the depth of feeling of unexpected love.

I fell in love with Mr. Darcy, at the age of eleven. Pride & Prejudice had been my first real adventure into the world of romantic love. The nuances of Darcy and Elizabeth’s complex relationship absolutely fascinated me. With that one story, Jane Austen awakened in me a lasting love of books. From that point on, I read anything thrown in my path continually searching for the same happy conclusion I found in P&P. It wasn’t long before I discovered romance books, Harlequin to be specific, and I was hooked!

However, it wasn’t until I studied photojournalism that the thought of writing a Romance took shape. Maybe it was a counterpoint to my growing disillusionment with the career-field, but for whatever reason, I decided to get serious. I started with two names and a time period and began to hammer out a story. I wrote on and off for a lot of years, and when I got up enough guts to try for publication in 2008, I received three rejection letters. I can’t say it was too devastating, since each letter offered words of advice, and in one case a hint of where my story broke down. On the fourth try, I received three separate offers, and I went with Wild Horse Press. Superstition’s Desire debuted in June 2009.

You mention on your website that you lived in England. How did that influence your writing?

A few months before I began writing Superstition’s Desire, I was living in England. I took a day off work and decided to explore Belvoir Castle, (the Brits pronounce it Beaver–no idea why). As it happened, I ended up getting there the same time as a tour bus and the crowd was a bit loud. As I headed for the second floor, I made a conscious effort to let the rowdy group outstrip me; I wanted to get the feel for the place without all the noise. Once the sounds faded, I poked my head into a room, which was off limits, and there, at the window, I noticed a young woman in period dress. I assumed she was a re-enactor since the castle had put on a jousting event earlier in the day. I though 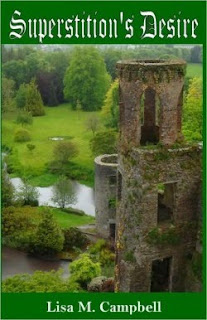 t to approach her, I had a question about the owner’s lineage, and ducked under the velvet rope sectioning off the room. However, when I straightened she was gone! To my knowledge the only way out of that particular room was through the doorway I had just entered. Was she a ghost? You tell me, but the physical attributes of Lady Arabella Wyndmere, in Superstition’s Desire was born from that encounter.

To my everlasting shock, SD was a best seller for Wild Horse Press, and AllRomanceeBooks.com. So much so, I’ve received letters from readers asking if I was going to give a secondary character in SD his own story. After all the wonderful and encouraging emails how could I not? Therefore, thanks to their enthusiasm, I’m working on it, and another full-length medieval Highland romance.

Do you have any hobbies? What do you do when you’re not writing?

Well, I do love to cook. I come from a long line of Italian cooks male and female. My great-grandmother cooked for an Italian Duke in the Piedmont region of Northern Italy, and I learned from a young age how to re-create our family’s traditional dishes and desserts—no store bought pasta for me! Lol One other hobby I really enjoy is going to the range with my husband and daughter—unfortunately, I’m not to humble to say I’m a pretty good shot!

Thanks so much for hosting me today, Lori. It’s been a pleasure!

Leave a comment! One lucky person will win their choice of either an ebook or printed copy of Lisa’s historical (U.S. and Overseas!). Winner announced Tuesday evening.