There’s nothing I like better than to visit book signings and add to my signed book collection. So when I got an invite from one of my favorite Indie bookstores for a book signing, I eagerly attended. One of the visiting authors was Maryann McFadden, a woman as nice as she is determined. Her story was one that was so inspiring, I had to have her on the blog. Like so many wannabe authors, Maryann didn’t have much success getting an agent or publisher. So she took matters into her own hands and her book went onto auction! Read Maryann’s story below and leave a comment for a chance to win a signed copy of her debut book!

Join me in welcoming Maryann to the bog!

Did you always want to be a writer?

Yes, ever since I was a little girl! I start writing little stories when I was about 11, on my Dad’s manual typewriter (back in the dark ages LOL). I continued writing in high school, poetry and essays, and of course I was a voracious reader. When I was in college, I also worked for my small town weekly newspaper, hoping to hone my writing skills. But my dream was always to write fiction.

After working as a free-lance journalist for 10 years, then leaving it for a real estate career and not writing for more than a decade, I decided I wanted to write again, but fiction this time. So I went back to school for a Master’s in English with a concentration in writing. That’s where my first novel, THE RICHEST SEASON, began.

Tell us about your debut novel.

Sometimes you have to leave your life to find yourself again…

A lonely corporate wife who runs away from home. An elderly woman facing a devastating loss. A top executive adrift in the world after he’s fired. These are the characters in Maryann McFadden’s The Richest Season. Set on beautiful , here is a novel about second chances occurring at the most inopportune times in life. In three parallel journeys Joanna, Paul and Grace walk away from lives they always thought they wanted, only to rediscover a part of themselves they’d all but forgotten.

Your road to publication is rather unique, can you tell us about that?

After 5 years of rejection, and shelving my first novel three times, I was ready to pack it in. And then I decided to self-publish THE RICHEST SEASON, because I really believed it was a wonderful novel! I found a small print on demand press and in 2006 it came out in trade paperback. I worked very hard marketing the book, especially targeting independent booksellers, who championed THE RICHEST SEASON. I even orchestrated my own book tour, and sent press releases and review copies to lots of newspapers where I was having events. It finally got the attention I’d always hoped for (even out selling The Kite Runner in a handful of stores that year!) After 8 months of working and spending every spare moment on marketing the book, I’d met with 40 book clubs, did 25 bookstore signings, and sold over 2,000 books. Plus, I got great reviews in newspapers and from booksellers

Can you tell us about your call story?

After working like a demon for 8 months pushing my self-published book, I decided to give it another go. One night in November, I decided to search for an agent again. I sent out e-mail queries and the very nex 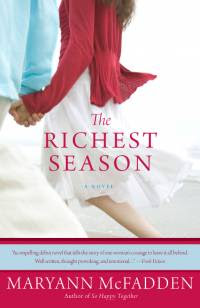 t morning got a call from Victoria Sander’s Agency asking me for an exclusive. I agreed. Eight weeks later they called, asking me to sign. That January morning was a story itself.

I live in the northwest corner of , known to some as the hinterlands, and while everyone else had rain, I woke up to not just snow, but ice. The winding, mountain roads were treacherous. My car got stuck just a few feet up my sister’s long, steep driveway when I went to pick her up. I had to get out and walk sideways up her snowy lawn, to keep from sliding back down. After a harrowing trip into the city that included a Path shutdown just as we got on the train, and gridlocked traffic from a presidential visit to lower Manhattan (by this time I was waiting for locusts), I finally met with Victoria in person. After my harrowing trip, I was rewarded with a smile and these words from : “This is a wonderful book!”

asked me to add a bit more material, which I was happy to do. I knew from meeting with so many book clubs that I had an opportunity to introduce the husband earlier, and that would really up the conflict and tension. When the new material was ready, she then sent copies of the manuscript to about 10 major publishers in . 4 days later, she called to tell me she thought we were going to have multiple offers. Shortly afterward, she decided to hold an auction for the rights to The Richest Season, and Hyperion Books won, offering me a 2 book hardcover deal for it and another book to be written in a year “in the same vein.” Within a few weeks, Random House in Germany bought Germany rights in a 5 way auction, and Mondadori took it in Italy in a preempt.

After all of my efforts, it seemed surreal!

Originally you did all of your promoting on your own. What was the most important thing you learned about self-promoting?

You have to be confident in what you’re doing (even if inside you have those little doubts LOL). After all, if you don’t sound all that sure about what you’re trying to get someone else to read, sell, or review, then the response may be tepid. Write the best book you can, then give it your all!

That said, I think the most important thing for me was the independent booksellers. The art of hand selling is truly that, and those individual stores take each book so seriously. Having so many of them take a chance on my self-published book, then not just stock it on their shelves, but make my novel a staff pick, recommend it to book clubs, and really get behind me, was just amazing!

Even though you get published, the self-promotion never stops. There are thousands of books out there, and you need to do as much as you can to reach readers. Facebook has been an amazing vehicle! I’ve had readers come from hours away to some of my events. And I’ve picked up so many new readers. I reward my readers with lots of nice goodies, such as book contests, so anyone interested can go to my author page and simply join! Here’s the web address:

Can you tell us about your newest release?

SO HAPPY TOGETHER was just released in trade paperback. It was an Indie Next Pick in hardcover, as was THE RICHEST SEASON. I am just thrilled about that! The inspiration came from my own life (but it’s strictly fiction!) as I found myself part of a demographic I’d never heard of before, The Sandwich Geneation. Here’s the gist of it: 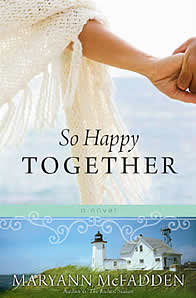 Everyone needs a dream…

Claire Noble gave up on hers a long time ago. A single mother and respected history teacher for 20 years, she’s also been caring for her aging parents. But now it’s finally Claire’s turn. She’s fallen in love with Rick Saunders, who is offering her security and a life of adventure. Before their fall wedding, she’ll be leaving for a summer in , where the fabled light has been luring artists for centuries, a chance in a lifetime to study with one of the most noted photographers in the country.

But just as Claire is about to step into her new life, she’s stopped in her tracks by family demands she could never have imagined. Her estranged daughter shows up, with a backpack full of problems. Her father reveals a fifty year-old secret that threatens to unravel their family. And her mother, who reads romance novels, laments that everyone has one great love in their lives, but at 78 years old, she’s still waiting for hers.

As Claire struggles with her duty to her family while trying to cling to her dreams, she becomes caught up in a relationship with an environmental writer who causes her to question everything she thought she wanted.

Set in the lush, rolling hills of northern and the romantic, windswept dunes of , So Happy Together is the heartbreaking and joyful journey of one woman who comes to realize that when you’re a mother, or a daughter, you’re never truly free.

I love to garden, and hike in the woods. I also love the ocean and my idea of heaven is a book and a beach! But I spend a lot of my time simply watching my little granddaughters, who are 4, 2 and 7 months. It’s a lot of work, but life’s biggest joy for me.


I just finished my third novel, which is in my agent’s hands, and I can’t say a whole lot about it yet, except it’s about a struggling bookseller and a struggling author, and how their lives intersect in amazing ways. Yes, there’s a bit of my own backstory there, and I don’t think there’s anything quite like it out there.

And I’m tweaking the ideas for my next book. I can’t wait to start writing, because I feel a bit lost when I’m not writing!
A special thanks to Maryann for stopping by.
Make sure to leave a comment! We’re giving away a signed copy of The Richest Season to one lucky person! Winner announced Wednesday!