Not only is Sophia Nash a talented writer, so gorgeous she could pose for the cover of her own romance novel, and led such an interesting life that she could actually be the subject of a novel, but word on the street is that Sophia is incredibly kind. Sophia has given quotes to many of my fellow debut authors and she readily agreed to take time from her busy schedule to blog!

Join me in welcoming Sophia to the blog!

Tell us your background in writing, how did you get started? Did you always want to be a writer? 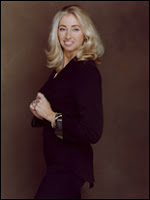 Not at all. I was the student who groaned the loudest when a teacher assigned an essay. But I did like to write long letters filled with stories to all my friends in far flung places (my family moved twelve times in about 17 years)! And I discovered that I loved the creative process of putting together a story for television when I worked for PM Magazine and the news division at WTVJ-Miami. I really do think it’s all about the love of creating.

What do you write (genre)?

I write Historical romance set during the Regency period (Jane Austen’s era) in England. My sixth book, Love With the Perfect Scoundrel, was released by Avon/Harper Collins in March 2009.

I began writing my first story A Secret Passion in January 2000 and signed the contract for it to be published by Signet/NAL in January 2003.

I entered A Secret Passion in several minor contests and the RWA Golden Heart contest in 2001. Finalists were announced in March 2002 and I was lucky enough to have the story chosen. The final judge, Hilary Ross from Signet, asked for revisions, which I completed several months later. She offered me a 2 book contract and that first story was published February 2004. The funny thing about the “call” was that I almost didn’t return Hilary Ross’s call that Friday afternoon because I was sure she would reject the revisions and I didn’t want it to ruin my weekend. One of my writer friends told me I was insane because editors only call when they are ready to offer you a contract. She was right.

Do you have a favorite book you’ve written, or a favorite hero/heroine?

While every story has a reason it should be my “favorite,” (i.e. the first book, the RITA winner, etc.) I will admit that I have a special place in my heart for A Dangerous Beauty. Luc St. Aubyn is the type of hero to whom I’m most drawn: alpha, diabolically wicked sense of humor, and a reluctant hero. When he falls, he falls hard. My favorite heroine is Grace Sheffey, the Countess of Sheffield from Love With the Perfect Scoundrel. She has such backbone under all those layers of elegant gowns~and one of the very best characters out of all the ladies in the club.

I write 6 days a week about 5 hours a day. During that time I’m writing new pages, revising those pages, drafting new story ideas, copy editing, etc. But I do not stop-except for 1 month each summer!

The real question is where I do not find ideas! The more I write, the more ideas the process inspires.

Yes and no. I usually write a ten page synopsis prior to writing any story. I spend hours thinking about the characters and the basic plot idea. Once the synopsis is done, I dive into the story and never look back. When I get stuck, I frequently reread the synopsis to see if it inspires me to move forward. If not, I reread character notes. Frequently I veer completely off the story road map. It’s a sloppy process! Generally, the end product is about 75% of the original synopsis plot.

Before I began writing romance I read a lot of Mary Jo Putney and Mary Balogh’s traditional regencies. Now that I write historical romance I rarely read it because I want to preserve my own style of writing. So I read a lot of historical biographies, really boring non fiction from the period, as well as contemporary and literary fiction. I’ve even been known to read about a vampire or two!

I’m in the fortunate position of being the mother of two wonderful children and the wife of an extraordinary man. I hang with them when I’m not writing. OK, I also do the laundry and cook—sometimes it’s even edible. We love to go on long walks or bicycle rides—and water-skiing during the summer months.

Write. Don’t talk about it. Don’t plan it. Don’t push it off for another day. If you want to be a writer, the only requirement is that you write. A lot. Reading is important, but not to the detriment of writing.

Give us your first line (or a favorite line) from your current work in progress and/or a blurb?

This is a first draft of the first page in the fourth (as of yet untitled) book in the Widows Club series, which will be released by Avon in early 2010:

Bejeweled ladies and bespectacled lords squashed tooth and jowl in St. Georges, all strained in readiness for the much anticipated wedding of the long lost Earl of Wallace and his beloved.

The bride entered on pearl encrusted slippers and took one step forward.
Chests puffed in outrage. Curses bloomed. Even the archbishop raised a brow. All eyes bypassed the lovely Countess of Sheffield carrying the orange blossoms of every fashionable bride, and they came to a rest on the man who escorted her.
The audacity. The unmitigated gall.
How dared Rowland Manning, the most unscrupulous man in all of England, tread these holy pavers of righteousness? Why, he was the bastard about whom gentlemen shielded their daughters, warned their sons, and prayed their wives never met. Yet here, amid the best and brightest luminaries of English aristocracy the big bad wolf escorted the innocent lamb—with the merest glint of large white teeth showing.
There was but one person not focused on the outrageous spectacle. She was far too busy praying. Where can we find you on the web (website, blog, facebook)?
I love to chat with readers and other writers. You can find me at http://www.sophianash.com/ or on facebook!
Thanks to Sophia for stopping by! Leave a comment and email addy. Two lucky readers will win one of Sophia’s books. Check back Saturday for the winners!