She’s a debut author, but already Elisabeth Naughton is getting rave reviews for her adventurous romance, Stolen Fury.
Writing books that combine suspense, archaeology and history, they’re a sexy package that any Indiana Jones fan will love!
Join me in welcoming Elisabeth to the blog!
You’ve mentioned that your road to publication wasn’t easy. Tell us about the process and how long it took for you to get published.

Well, every writer’s journey is different, but I can tell you honestly that I’m “average”. I read a statistic so

That doesn’t mean it wasn’t a struggle. Hundreds of rejections. Several “almosts”. Plenty of blood sweat and tears. But I never gave up believing in my writing and myself, and I worked hard to make each manuscript better than the last (I still do). I think every writer comes from a different background and different life experiences, and for some that means a short road to publication, and for others, a longer road. But my motto has always been: You can’t get there if you quit. You have to keep working hard, day in and day out, even when it’s not fun. And that’s what I continue to do.

When you finally got “the call,” saying you’d sold, were you shocked? Numb?

My agent called on a Friday morning and asked if I had a medium-length synopsis for STOLEN FURY and if I could send it to her. The book had already been out on submission for a while, and though it hadn’t been bought yet, we’d gotten nothing but glowing feedback on it. Unfortunately, it was just too “light RS” for the market at that time. As it had been sent up to executive committee before, I didn’t get too excited about the phone call. I sent the synopsis, and knowing there was interest, went to the beach with my writer’s group for an already-planned weekend where I’d like to say I didn’t stress too much, but of course, I did.

Monday came and went. No word. Tuesday my agent called with the offer. I think I was too stunned to say much. Several times my agent asked, “You are excited about this, right?” and I’m pretty sure I nodded (which she couldn’t see over the phone) and muttered, “uh, huh.” But my head was spinning with all the info she’d passed on to me. And while It would be glamorous to say I went out for a champagne dinner to celebrate, alas, that is not the truth. My writer friends love to joke about this, because, well, it’s just plain funny…but the truth is I celebrated my sale by cleaning the bathrooms. At the time, it was something I could do that I had control over. And at the time, everything else just seemed totally out of my hands.

You will be happy to know that I did, however, scream and squeal after I hung up with my editor for the first time. THAT’s when the entire sale-thing became real to me. And I walked around with a smile on my face for probably a good month after that as well.

How did you come up with the idea for your debut book? And can you give us a short blurb?

The fourth book I wrote was a very dark RS. I loved it—still do, but when I finished it, I was in the mood for something lighter, more fun. I thought hard and long about my writing, and realized, I didn’t want to write dark and gritty RS. What I loved most was adventure. Indiana Jones, Goonies, Romancing the Stone…those were the type of movies I enjoyed watching and they were the books I sought out and rarely found. So I decided to write what I wanted to read. I put that dark RS away and didn’t try to shop it. I still think it has the potential to sell—I love the characters and plot—but for now it’s not what I want to be writing.

As for the book, it’s a fast-paced action adventure romance about one archaeologist—Lisa Maxwell—who has staked her career on collecting the priceless set of ancient Greek reliefs, the three Furies. She finds the first, Alecto, and while lecturing in Italy, meets Rafe Sullivan, a man who briefly distracts her from her goal. After a passionate seduction, Lisa wakes to an empty bed and, worse yet, an empty safe. But she’s not the kind of woman to get mad, she plans to get even…even if she has to partner up with the sexy scoundrel who swindled her. Together they’re on the run to find the last two Furies. But Lisa soon finds Rafe is the least of her worries. Other treasure hunters are hot on their trail—and they’ll kill to get to the prize first.

Your debut book has gotten amazing reviews, but how do you deal with negative responses toward either your writing, or the fact that you write romances?

I’ve developed a thick skin over the years (anyone in this industry knows they have to to survive), but mainly I remind myself that you can’t please everyone. I do realize not everyone is going to love my books or writing or characters, and that’s okay because I don’t love every book I’ve ever picked up. Reading is a personal preference, and we’re not all the same. Which is good because if we were, all the books would be the same, too. For me, I simply focus on the glowing fan mail I’ve received and remember that I’m writing the books that I want to be writing. And that there are plenty of people out there who are enjoying them.

As for negative views on romance…it’s the same. You can’t expect everyone to like what you like, and you can’t change personal biases. But you can educate one person at a time. When I run into someone who has something crass to say about romance, especially those who have never even read a romance, I remind them of the statistics—that romance is the top selling fiction genre, that it’s the only one growing in this floundering economy, and that if you look at any box-office hit Hollywood is pumping out, at the core what do you have? A romance. That usually shuts them right up.

I know you were a science teacher. How did this influence your writing career?

Yes, you’re right. I taught junior high science for 8 years, and I still miss the kids. My favorite subjects to teach were archaeology and earth sciences. I loved talking about geology and how it impacts archaeological sites. I also enjoyed teaching chemistry and relating it to real-life disciplines, like radio-carbon dating. Of course, those “favorites” have filtered into my books, in obvious ways. But the biggest impact is that even when I was teaching (before I began my writing journey) I was imagining how the new scientific discoveries I was sharing with my students could be woven into a story.

Your books deal heavily with antiquities and archaeology. Do you have a special interest in history?

Totally. I’m fascinated with what happened in the past and how it relates to today. I could spend days researching. (And often do!)

Do you have a favorite author? Or a writer who influenced your work?

In romance? Judith McNaught. I love her characters. I love the depth of emotion she brings into her stories. I could reread Perfect and Paradise a dozen times and find something I missed in each earlier pass.

In other genres I’m fascinated by writers like Tolkein and Lewis who create these amazing worlds and draw you into them almost seemlessly.

What’s your writing schedule like? Do you write every day? In mornings, afternoons?

I do the bulk of my writing at night after my kids go to bed. I’m trying to train myself to be more productive during the day, but I’m easily distracted. I do some writing every other morning when my youngest is in school, take a break and then try to do more when (if) he takes a nap in the afternoon. Otherwise I’m working on promo or editing during the day. But new words generally get written at night. I dream of the day he’s in school full time and I can write during daylight hours. But I have a feeling I’ll be easily distracted then as well.

Tell us about your current work in progress. Can you give us a favorite line or short blurb?

At this point the Stolen books are done. Book two – STOLEN HEAT – releases July 28th, and the third one – STOLEN SEDUCTION – is with my editor and will hit shelves Jan 2010. I’m awaiting revisions on that one as I type. I love both of these books for so many reasons and can’t wait for readers to get their hands on them. Recently I sent my agent a new adventure proposal and I’m anxious to hear what she thinks. This one is a real Indiana Jones meets James Bond, so it could be very fun.

As for the current wip…last November I sold a new paranormal series to my editor that centers around a group of modern warriors descended from the heroes of Greek mythology – Heracles, Odysseus, Perseus, Jason, etc. What if they were real? And what if they were walking among us, protecting not only their own heroic race from the darkness of the Underworld, but humans as well? The first book in that series – MARKED – is set to release May 2010, and I’m currently hard at work on the second. My publisher is very excited about the new series and so am I. While the books are paranormal, they’re still my voice, still involve adventure and high action, and still have a deep, rich (sexy!) romance at the core. 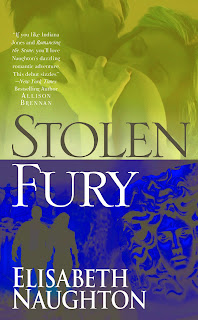 Do you have any interest in working any other time periods or subgenres?

So far, no. But I’ve learned never to say never. I’m currently writing both RS and paranormal and for now that’s enough. But a year and a half ago I never would have thought I’d be interested in writing paranormal, let alone writing it under contract, so you just never know what the future holds.

I’m a huge baseball nut. My hubby and I have season tickets to our alma mater – Oregon State University (Two time National Champions in 2006 and 2007!) – and most weekends you can find me at the stadium for at least one game. My kids are also involved heavily in baseball and swimming, so when I’m not at an OSU game, I’m usually at one of theirs.

I’m also a runner. Last year I completed my first half marathon. I run 3 days a week with a non-writing friend who helps me plot out my books on our long runs. Running keeps me active and my brain clear. And it also helps a lot with stress.

Thanks so much for having me, Lori. I have a signed copy of STOLEN FURY to give away to one lucky commenter!

Thanks Elisabeth! You guys know the drill. Leave a comment and your email addy. Winner will be announced Friday!