I have a definite fondness for time travels. But I admit, most feel a bit similar in plot which is probably why we haven’t seen many in bookstores. That is until Gwyn Cready entered the picture. In my opinion Gwyn has redefined time travels and for the better. Gwyn’s books are hilarious, emotional, and most importantly romantic. It’s not surprising that her newest book, Seducing Mr. Darcy, has been nominated for a Rita award.

Join me in welcoming Gwyn to the blog!

Tell us how you got started as a writer. I became a writer to honor my younger sister Claire, who died without warming at age 31. She was a bohemian poet and photographer. I was a straight-laced business executive. It’s what she would have w

anted for me. My goal was to get a book published and dedicate it to her, which I did with Tumbling Through Time, my debut. I know she’s out there smiling.

How long did it take to get published? Was it quick and easy, or long and torturous?

It took nine years from the time I began writing until I got the call (actually, the voice mail.) It was another year and a half after that before the book came out. “Overnight success” and “Gwyn Cready” are not words you generally find in the same sentence.

Tell us about “the call,” the first book you sold. Were you expecting it? Or were you shocked?

I was kind of expecting it, to tell you the truth. I’d written a manuscript that was good enough to score me an agent, though it didn’t sell, but the second one seemed great, even to me. My agent loved it. My husband laughed so hard he cried. I guess I just knew it was good. Even so, you’re never completely sure.

My agent called me late in the day, 6 or 7 pm. I’d left the phone in the car to charge, so she left a message along the lines of “Please call. I have some really exciting news,” which I didn’t get until the next morning at 7:30 when I was driving my daughter to school. Now I was pretty sure that meant she’d sold Tumbling Through Time–it would have been a pretty cruel message to leave otherwise–but I wasn’t sure and in any case, I didn’t know what publisher was interested, how much they were offering and whether they wanted more than one. Worse, I knew she didn’t get into the office until 10 or so, and, even worse than that, I knew I would be in a training session that day at work that ran from eight until two–more than “in it,” actually, I was actually running it and would therefore have no chance to call her until mid-afternoon at the earliest. Tom Petty was right: anticipation is the hardest part. I’ve never seen the clock move so slowly.

When we finally hooked up, I got the fantastic news that Pocket Books bought my book as well as a second. Worst part was, my boss at the time walked into my office about ten seconds into the call, so I got to “share” the getting the news with him. I spent the rest of the day in meetings, texting my friends and family surreptitiously under the table.

You write Time Travels, which a lot of people love, but which seem to be difficult to sell at the moment. 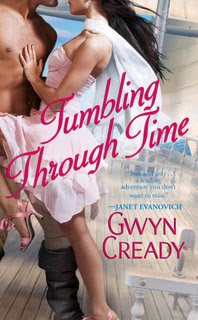 In Seducing Mr. Darcy, you take on the romance world’s ultimate leading man. Were you nervous that readers would be annoyed with you for messing with Mr. Darcy and Elizabeth?

Yes! I debated a long time before committing. I finally decided that if I wrote it, I’d have to meet three requirements: first, I had to do it with love; second, if I had my heroine involved with Darcy, it had to start–and end–before he ever meets Lizzy; and, third, I had to ensure Darcy and Lizzy end up just as happy as they are in the book. Point one was a given, so I gave myself permission to proceed, following points two and three.

Do you plan on writing any other subgenre?

Yep, historical is definitely on the radar. I have a trilogy about three English heroes on the border of England and Scotland in the early eighteenth century: a duke, an army major and a woman spy.

You are a Rita Nominee. Where were you when you got that call and how does it feel?

Again, no live call. What is it with me? RWA tried to call. I didn’t recognize the number so I ignored it. They didn’t leave a message. Instead they sent me a email, which I read on my phone, in a towel, after I stepped out of the shower. Definitely better than bodywash.

You have a great section on your website in which readers can actually make contact with the characters of your book. What made you think of that?

Have you ever read Outlander? All I wanted to do after I finished that was book talk to Jamie Fraser. I would have given anything to spend a leisurely afternoon exchanging emails with my favorite Highland warrior

Can you give us a favorite line or blurb from your current work in progress?

How about a quick summary?

A long-dead painter comes back to life to settle the hash of the woman whose series of sexy, tell-all biographies is driving the dead art world nuts. The hero, Peter Lely, is an artist who actually existed. He was the royal portraitist to the court of Charles II from 1661 to 1680. 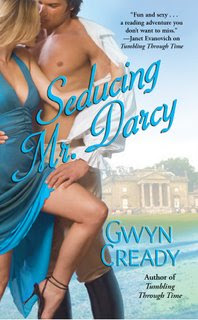 Gwyn Cready, Romance Novelist on Facebook
@GwynCready on Twitter or gwyn@cready.com
Thanks Gwyn!
Remember to leave a comment and email addy. Two lucky people will win a copy of Seducing Mr. Darcy!