I met Kate Austin through our published author group and immediately connected with her. She’s sweet, she’s fun, and she’s written a variety of books, from women’s fiction to spicy stories for Cobblestone and Harlequin.

Join me in welcoming Kate to the blog! 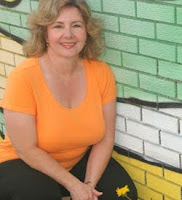 all the stories writers tell about wanting to be a writer ever since they could remember. Not me. I was a voracious reader, still am, but I didn’t even think about writing until I went to university (late) and got started writing short stories and poetry. After about 15 years of this, getting lots published but making zero money, I thought I’d try writing novels.

How long did it take for you to get published once you had the first book done?

Once I had the first book I thought was publishable – two books in, I think, though I’ve very carefully put those first two books out of my head – it took me about a year.

I did see it coming. My agent was convinced she’d sell the book and it sold in a week or so, plus I sold a second book I’d already written in the same contract. I was shocked to sell at all, but once I got to this place, not shocked that these two books sold.

Right now I don’t have a writing schedule for a couple of reasons. The first reason is that I’m between contracts and I’m the kind of person who responds well to deadlines. I’ve been writing a few short pieces and novellas for Cobblestone Press – but there’s no deadline pressure in that. The second reason is that, after many years of living on my own, I’ve just moved in with my new partner. We have odd schedules and when I get a new contract and have deadlines, my schedule will probably go somethin

g like this – four mornings a week and three evenings. That would be the ideal schedule but I suspect that it won’t always work.

When I was writing for Next, I could write a book in six-eight weeks – working hard at it. Now I’m writing bigger books so I’d guess about three-four months full out for the first draft – and my first drafts are pretty close to final because I revise as I go along.

What has surprised you most about being an author?

What surprises every author, I think. That there’s so much else to do other than writing. All the promotion, all the conferences, all the “stuff” that isn’t writing.

Keep writing. Don’t give up. And, most of all, learn to enjoy the process because that’s all you can be sure of.

You started out writing for Harlequin. How has your writing and your stories progressed since then?

Writing for Harlequin Next wasn’t at all like writing for the other category lines. It was always meant to be women’s fiction and so that’s what I was writing. The only thing that might have changed is that I’m writing a little longer, but I’m still writing the same stories. But writing six books in two years really helped me hone my craft and gave me a lot of confidence that I didn’t have going into those years.

on two books right now and I hate to admit it, but I have blurbs for neither of them. They’re big, complicated women’s fiction books. The first one spans 1910 to 1952; the second, I’m not sure about yet. They’re both – as all my books are – what I like to call coming of age stories. Stories about women (not young adults but mature women – 30-50, I’d say) figuring out who they are and what they want to do with their lives.

Out of all of your books, do you have a favorite or a favorite character? Or, which character is most like you?

I think all my characters are a little bit like me and often they’re about me at a particular stage in my life (a stage I’m long past, I might add). But I do have an absolutely favorite character, one whose story I really want to finish. She’s a secondary character in three books – The Sunshine Coast News, The Gossip Queens and Last Night at the Halfmoon. She’s 83, she’s been engaged dozens of times but she’s never been married. I want her to have a great romance with a great man (probably younger!) and get married. 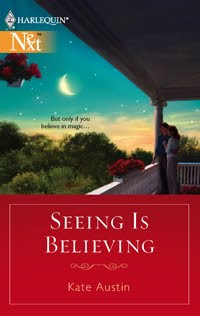 http://www.kateaustin.ca/
Facebook (I’m new at this, but I live in Vancouver BC so that should help)
http://www.witchychicks.blogspot.com/

What do you do when you’re not writing? Any Hobbies?
I read (a lot – a book a day). I walk on the beach or to the mall (shopping is one of my favorite hobbies!). I go to the gym. I love movies. And I spent as much time as possible with my family and friends.

A special thanks to Kate for stopping by.

Remember to leave a comment and email addy! One lucky winner will receive a copy of Seeing Is Believing! I’ll contact the winner Tuesday!