I met Joanna Waugh about a year ago when I joined a local writing group. Immediately, I was impressed with the woman and her work. As president of our group, Joanna was able to delegate tasks and keep us on track, all while helping us improve our manuscripts.

Not only was she a great president, her own writing was wonderful as well. Joanna has the sort of voice others are envious of, her writing smooth and seemingly effortless and her books showcase her creativity.
Join me in welcoming Joanna to the blog!
Tell us your background in writing, how did you get started? Did you always want to be a writer?

As an asthmatic child, I spent a lot of time alone, reading and fantasizing. Writing my own stories was a natural 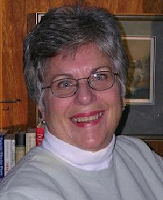 outgrowth of this situation. By junior high, I was writing romances. My first historical was about the doomed romance between an American girl and a British officer during the Revolution. In adulthood, I switched to nonfiction. Mostly political stuff. I did feature articles for specialty magazines and newspapers. Then I woke up one morning ten years ago with a full-blown novel in my head and it was back to romantic fiction.

What do you write (genre)?

I write Regency-set historical romance but I’m also interested in the Revolutionary War. Next to the late 1700 and early 1800 time period, I find the Edwardian Era most fascinating. The turn of the twentieth century was a time of great social and scientific transition. Technology was advancing rapidly, yet the social structure hadn’t changed much in a hundred years. Women were starting to demand the right to vote and seeking better treatment in a male dominated world. As a child of the sixties, I can identify with that.

Ten years. But it was three years from the time I finished BLIND FORTUNE until Cerridwen Press offered me a contract.

I finished BLIND FORTUNE in 2004 and entered it into the Beau Monde’s Royal Ascot writing contest where it placed second. That win landed Roberta Brown as my agent. She shopped the book around New York but nobody was interested in a blind heroine. So I submitted the book to Cerridwen Press and they snapped it up. CP released it in ebook format last July and trade paperback in February of this year.
In 2008, BLIND FORTUNE was chosen as one of the top ten notable historical romance debuts by Romance Lists, and its music room love scene was nominated for and won Midnight Seductions’ Endless Romance Contest.
Do you have a favorite book you’ve written, or a favorite hero/heroine?

My favorite hero and heroine are Fortuna and Charles from BLIND FORTUNE. I love Fortuna’s feisty vulnerability and Charles’s tender strength. And the way he starts out so unlikable yet redeems himself in the end.
The story is based on my experiences with my late husband who went blind from diabetes. It always amazed me how he and I could hear the same conversation, yet interpret it differently because he couldn’t see the speaker’s face and body language. The kind of misunderstanding is at the heart of Fortuna’s and Charles’ relationship.
What’s your writing schedule like?

I retired five years ago so I could write full-time. A typical day for me begins around 8AM with a pot of coffee and my email. I spend an hour going through it and updating my website Myspace, Facebook and blog pages. Then I get down to the business of writing. I generally work through until late afternoon before calling it a day.

Most of them develop out of my research. As those who are familiar with my website and blog know, I love learning about the Regency period. I often run across tidbits of information that turn into ideas for a book. There are half a dozen folders on my shelf with outlines for future stories.

Ah, the old pantster verses plotter question. I’m definitely a plotter. I have to know the whole story before I begin. The action in the middle might be a bit fuzzy, but the beginning and the end are full-blown before I start writing. And I write linearly; no jumping around. Before I can move on, the chapter I’m working on has to be clean and ready for submission.

There are so many! But I will say Mary Balogh’s Silent Melody was the impetus behind BLIND FORTUNE. Her heroine—Lady Emily—is a deaf mute. I found it fascinating the way she wrote Emmy’s point of view without auditory cues. I decided to try my hand at writing a b 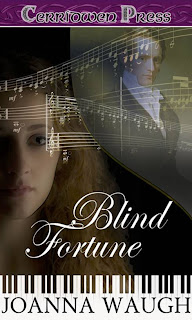 I read, read, read! If I like an author, I buy their entire backlist. (Hoorah for the Internet!) As a result, I have a rather extensive library.

When my nose isn’t buried in a book, I get together with writer friends and attend conferences. And visit my son in Arizona. I collect Russian nesting dolls and antique nautical prints. I love to roam antique shops where I always discover something new and fascinating about life in the past.

DO IT NOW. Had I known how difficult the road to publication was, I would have started a lot sooner. My advice is – don’t put your writing on hold; don’t let life get in the way. And never, never, never give up! Believe in your abilities. It’s vital when those rejection letters start coming in.

Give us your first line (or a favorite line) from your current work in progress and/or a blurb?

Right now I’m working on a Regency paranormal set on the border of Scotland in 1816. Home from the war, my hero accidentally releases the 6th century spirit of a pagan king from a well in which it has been trapped for twelve hundred years. The spirit follows him home and begins wreaking havoc. The hero and heroine must overcome their differences and work together to banish it. In the process, they rediscover the love they’d lost two years before.

Check out my resources for Regency readers and writers at

www.joannawaugh.com (To read excerpts from BLIND FORTUNE, just click on “Joanna’s Books.”)
In addition, I blog about British customs and holidays at www.joannawaugh.blogspot.com
Readers also can find me at www.myspace.com/joannawaugh
and on Facebook at www.facebook.com/people/Joanna-Waugh/1355015961
They can email me at Joanna.waugh@yahoo.com
Thanks to Joanna for stopping by!
Leave a comment for your chance to win a $10 gift card to Barnes and Noble or Borders! Winner will be announced on Thursday!