When my cousin Aaron told me about Polly Shulman‘s book, Enthusiasm, I knew it had to be worth a read. Aaron can be rather picky about what he considers good. When I bought the book, I realized he was right, Polly’s debut young adult book is a definite keeper and well worth a trip to the book store. The relationship between the two female characters is one many will relate to, especially if you’ve ever been overshadowed by a friend. Whether you’re an adult or teen, Polly’s book will keep you entertained from the beginning until the end.

Join me in welcoming Polly to the blog!

Tell us your background in writing, how did you get started? Did you always want to be a writer?

I no longer remember what I thought a gleepy glut was.

What do you write?

Fiction for teenagers, at least so far. My first novel, Enthusiasm, was a tribute to Jane Austen, so of course it’s a romance. But my favorite genre, way before it was popular, was YA fantasy, such as the Chrestomancy books by the British novelist Diana Wynne Jones. During my long decades of writer’s block, I started a few YA fantasies, including one about a prepubescent wizard named Harry. This was long before Rowling. Then when Harry Potter was published, I was so freaked out by all the fuss that I decided to steer clear of fantasy, at least at first. So when I finally was able to write fiction, I started with a novel about ordinary, non-magical kids.

But my second novel, The Grimm Collection, which I’ve just finished, is a fantasy, though there’s a romance in it too.

I’ve always made my living as a writer and editor, so I guess 21? But that was journalism and criticism. My first book wasn’t sold until I was 40.

It took me exactly a year to write. I’d had a dream job for three years, writing a weekly book review for the Long Island newspaper Newsday. Then my editor went on maternity leave and the higher-ups took the opportunity to cut her budget while she wasn’t there to fight for it. So I took a hard look at my life and decided I had to either go get a job in an office, which I really didn’t want to do, or actually finish one of those novels I’d started over the years.
Somehow I was able to do it. I don’t know whether it was because of the three years’ practice turning in 1400 words every Tuesday, or the sudden wisdom and discipline of middle age, or what. But exactly a year after I started, I had a complete manuscript. Then it took a few agonizing months to find an agent. Once I had, she sold it pretty quickly.

That was a sad period, actually. My stepfather had had a bad accident and was in the hospital for months, in the ICU. The accident happened in Maine, and I live in New York. So I went north to be with my mother and stepfather, right when my agent was sending Enthusiasm to editors. I couldn’t use my cell phone in the hospital, of course, so I would go out to the hospital’s courtyard and talk to her about the offers, then go back in and sit with my mother by my stepfather’s bed.

Enthusiasm is about two best friends, shy Julie and outgoing Ashleigh, who discover Jane Austen. Ashleigh is one of those people who go through crazes. She throws herself passionately into each one until the next one comes along. When Julie gives her a copy of Pride and Prejudice, she decides they need Jane Austen-style romance in their own lives and drags Julie to a dance at a fancy boys’ school. Hilarity (I hope) ensues.

I got offers for Enthusiasm from three publishers. I chose the one from the editor I felt understood the book best. She also bought my new book, The Grimm Collection. She’s an amazing editor–I’m so lucky I get to work with her.

Do you have a favorite book you’ve written, or a favorite hero/heroine?

I’ve only finished two books so far, so I think it’s too soon to say. But I’m pretty fond of dreadful Seth in Enthusiasm. He’s a pompous kid who thinks he’s Julie’s boyfriend, and she’s too nice (or too wimpy) to set him straight. 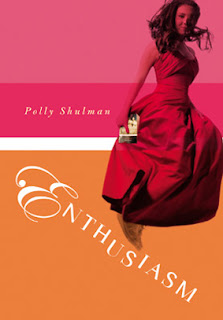 Every day when I’m not too busy doing work that actually pays money, I write 600 words of whatever novel I’m working on. But I give myself weekends and holidays off.

Sometimes they come to me out of the blue. Sometimes I steal them from Shakespeare.

I come up with the overall idea first, then the characters, then the broad outline of the plot. Various scenes occur to me out of order, but I mostly write from beginning to end. I figure out the details as I write.

I spend a whole lot of time walking restlessly around New York. But I’m not sure that’s what I do when I’m not writing—I’m usually thinking about my book when I do. I also edit articles about science and collect Victorian jewelry and read.

Make sure you have a way to make a living. Almost nobody makes a living from writing. Read! If you don’t love reading other people’s books, nobody’s going to love reading yours. Write what you would want to read—that way even if you can’t find a publisher, you’ll still have at least one reader. Listen to your editor, she’s probably right. The first draft doesn’t need to be perfect, it just needs to be finished. You can fix all that hard stuff later. Once you’ve written a first draft, fix the stuff you left for later.

A warm thanks to Polly for stopping by.
Leave a comment for your chance to win a copy of Polly’s book and come back soon for interviews with historic romance authors Jackie Ivie and Jennifer Haymore and a chance to win one of their books!