Like many others, I’ve always been fascinated with the Medieval Era. A time of courtly love is the perfect era for 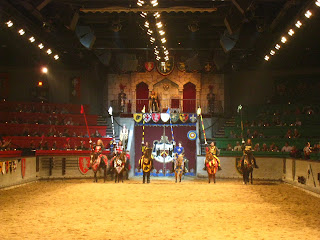 a fan of romance novels. I adored Pre-Raphaelite paintings (which often had a Medieval flavor), King Arthur and romances by historical favorites like Julie Garwood, who knows how to write a damn hot medieval knight. I even named my son after a Medieval Knight. 🙂

So this weekend we decided to take our son to Medieval Times. If you’ve never heard of it, Medieval Times is basically a theme restaurant based on the Medieval Time period. You get to wear a paper crown and eat a meal with your hands, no silverware allowed, all while watching Knights “fight” each other and participate in a faux tournament, horses and all. It’s a bit on the expensive side, but my son (who is 5 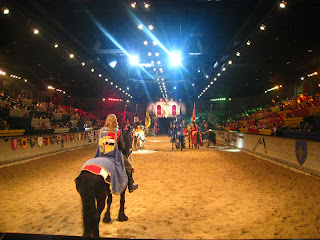 ) absolutely adored it. He was on the edge of his seat, barely ate, the entire time. He particularly liked the Green Knight who growled at him every time he rode his horse by.

I took a few pictures, although most didn’t turn out well. It’s really a fun experience and worth saving for if you or your children would like that sort of thing.

And speaking of the Medieval Times…

In the near future I’ll be posting an interview with author Diana Cosby. She writes sexy Scottish Medievals and she’ll be giving away a signed copy of her debut book, His Captive.