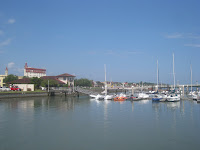 we went on vacation to St. Augustine, which is located on the northeastern coast of Florida. Years ago I’d heard that St. Augustine was the oldest continuously occupied European city in the U.S. and that had immediately captured my interest. I was determined to visit and finally we did. I was not at all disappointed.

There are plenty of lovely beaches along St. Augustine’s coast, but it is the town itself that brings in visitors. The downtown city isn’t on the ocean, although it is visible from parts. But its on a bay, still a beautiful setting. 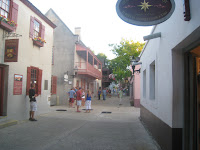 A little history about St. Augustine. The city was founded in 1565 by Spanish explorer Pedro Menendez de Aviles, although the area was first explored in 1513 by Ponce de Leon. Yes, the Ponce de Leon who attempted to find the Fountain of Youth. More about that on another post. Since then the city has been attacked by French, English, Native Americans, and yes, those nasty Pirates. And while you’re walking through town, you can totally imagine pirates walking the same street! 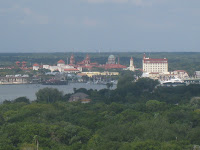 enter the town the impressive skyline of spires and towers is the first thing you’ll notice. Stucco, brick and stone buildings (of English and Spanish influence) line narrow cobbled streets. There’s plenty of shopping and a variety of places to eat. We were there for 3 full days and could have easily been there another 3 and still not have seen everything. The town was originally surrounded by a stone wall, there for protection. Today, only the entrance remains. Directly across from town, on the bay is the fort. Built in the 1600s, the Castillo de San Marcos fort was established to keep those pesky invaders out. 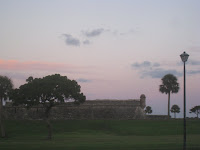 Now for the downsides. We got there on a Saturday and it was crowded. Although we did hear that September and May are the best and least crowded times to go. I can’t imagine what it’s like when its busy season! The weekdays were much better. So if you can, go during the week in May or September.

I’ll be totally honest with you, there were a few homeless people, which I wasn’t expecting to see since the town isn’t all that large. If you’re from a larger city, you probably won’t even notice. And to be fair, they didn’t bother us at all; no one asked for money.

Even with the downsides, this town is definitely one of my favorite places. I would move to St. Augustine in a second if I could. The pictures really don’t do it justice and I highly recommend you visit!

And just because, I’ve decided to give away a book left over from the conference back in July. This is a signed, contemporary romance titled On The Steamy Side by Louisa Edwards. And it is steamy! Leave a comment. I’ll announce the winner on Wednesday.

I’ll also post more about St. Augustine and the things to do and see while in the city. And perhaps I’ll give away another book 😉