Things to Do in St. Augustine

First of all, the winner of On The Steamy Side by Louisa Edwards is…

Now, more on St. Augustine. As I mentioned, we arrived in St. Augustine, Florida on Saturday. That evening we went on a ghost walking tour. Even if you don’t believe in ghosts, I highly recommend Ghost Tours as you learn so many unique facts about the history of a place. In fact, St. Augustine is apparently the third most haunted City in the U.S. after Savannah and New Orleans. 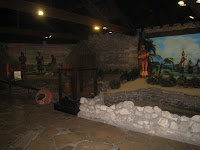 Sunday we visited the Fountain of Youth. Being that I’ve worked in a museum, I tend to notice things others might not. There are a few indoor buildings/exhibits at the Fountain. If you’re reading, owners, your place could do with a touch of remodeling and updating. Still, the grounds are beautiful, with peacocks roaming freely. Also, the people who were working there that Sunday were great! Super friendly, so a thumbs up for the staff. You have to go because, well, it’s the Fountain of Youth!

A bit on the history of the Fountain of Youth. Apparently the King of Spain (in the 1500s) was obsessed with finding a cure for his aging body. He sent Ponce De Leon into the world to find a cure. Now, 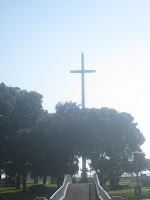 the Spanish at this time were usually 5 feet tall or shorter and after months at Sea, probably a bit sickly. They landed on the coast of Eastern Florida and met the Native Indians, who were over 6 feet tall, some even seven. These friendly Natives frolicked and drank from a nearby spring. This spring, Ponce De Leon, considered to be the Fountain of Youth. Now the fountain, isn’t actually a fountain. Originally it was a stream. That dried up and so the current Fountain of Youth is actually a well that was dug in the same area as the spring. There are little cups of the water from the well that you can drink. Funny story, at first my son (who is 6) didn’t want to drink the water because he was worried 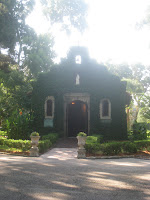 he’d stay little forever and therefore have to go to school forever. Shows you how much he likes school.

Right next door to the Fountain of Youth is the Prince of Peace Church and grounds. I’m not Catholic, but you don’t need to be to appreciate this place. The grounds are free, although they do have a donation box. The grounds are beautiful and peaceful. There’s a huge Cross (over 200 feet tall) that marks the area of the first Catholic mass. But most beautiful to me was the Chapel of Our Lady La Leche, a tiny stone building. The original chapel was built in the 1700s but was destroyed, I believe, 4 times. The last time it was erected was in the early 1900s. As I said, its a very peaceful place to visit 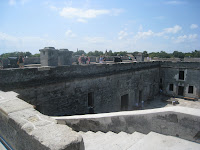 and one of the oldest spots in the area.

Next we went downtown to the Fort. As I mentioned in the last post, the Castillo de San Marcos fort was established in the 1600s to keep those pesky invaders out. Although the walls seem low, when you climb to the top you’ll have a wonderful view of the bay. Definitely worth visiting. 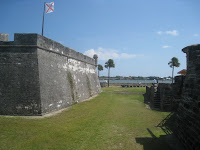 Speaking of views…if you want an even better place to see the town and ocean, head a little out of the downtown area to the Lighthouse. I’m not positive, but I think it was built in the later 1800s. There are over 200 steps, but plenty of spots to rest along the way up 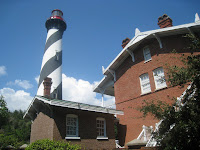 and the view is amazing. There is a height regulation, so little kids (under 5 years) may not be able to climb.

Being that we love nature, we also went on a boat ride with Eco Tours which was very fun. These are either done in Kayaks or small boats that hold up to 6. Our captain, Zach, was great and informative. We saw plenty of water birds and dolphins and even stopped at a small island where we saw hundreds of tiny Fiddler Crabs.

As for the beaches… 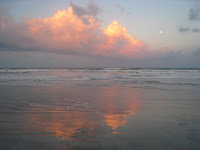 I’ll be honest, if you want clear, warmer water with lots of shells, go to the gulf coast. The water on the East coast is a bit rougher and colder. Still, it’s the beach and it is beautiful. We did discover that if you head north, toward Vilano Beach, you’ll find less crowded areas, more shells and even areas marking Sea Turtle nests.

So that’s about all we saw while we were there. If you live in the U.S., especially if you go to Florida, you need to visit St. Augustine. Not only is it fascinating and beautiful, it’s really such an important part of our history and the history of the world.

Now, I’m going to give away another book! A signed copy of Running Hot by Jayne Ann Krentz. So leave a comment. Winner announced Friday.