Hi everyone! Hope you’re having a great week. I want to give a special thanks to Christie Kelley for stopping by.

Now, the winner of Christie’s book is ….

Send me your address and I’ll get that to Christie asap.

Make sure to come back next Monday for an interview and giveaway with author Diana Cosby! And of course she’ll be giving away a book.

I’ve been floundering with blog post ideas. There are only so many author interviews a person can do. 🙂 It was after reading the posts by my friend Christiana Cameron (who had been writing about places to see in Nashville), that I realized I could write about my own travels. They might or might not be exciting, but hopefully they’re somewhat interesting and perhaps useful. Because I love to travel, we usually go somewhere every weekend. It might be a day drive, or just an hour away, but by the time we’ve been living somewhere a couple years, we’ve pretty much been everywhere of interest in the area. Last weekend we decided to check out some Native American sites.

At one time, the Cherokee Tribe of Native Americans lived in most of Northern Georgia. It was in the 1830s that the U.S. Government forced most of these Cherokee west on an extensive and exhausting journey called The Trail of Tears that left thousands dead. Until that time, the Cherokee tribe was firmly established, living in homes and small towns, some much like European. 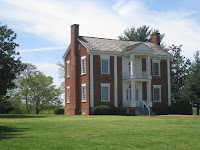 So when I read about two of these Cherokee sites, I jumped at the chance to visit them.

The first place we traveled was the home of Chief Vann. By looking at the pictures you can see the home looks very European. Chief Vann was a hugely influential Cherokee (Actually half Cherokee and half Scottish) and very wealthy man. He was also sort of an ass and ended up getting shot 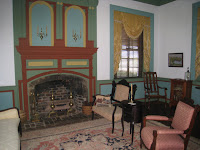 and killed by some unknown enemy. At his death, his son (a much more even-tempered man) named Joseph, took over. His son was just as influential and only added to the family wealth. But their position in society didn’t matter much. When they started pushing Native Americans west, the Vann family had to pack up and head out, under gun point, no less.

Not far from Chief Vann’s home is located the second stop of our trip, New Echota. In the 1800s New Echota served as the Cherokee capital and included one of the first Indian language newspaper offices. Of the twelve buildings, some are original, some reconstructed, but all give you an idea of what life was like in the 1800s. 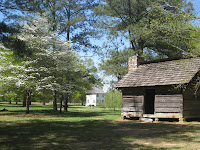 I think what surprised me the most was how assimilated (into European or “white” culture) the tribes were right before they were forced to leave their homelands. But even more shocking was the fact that some of the wealthier Cherokee owned African slaves. In fact they have quite a bit of information on individual slaves at Chief Vann’s home, some quite heart wrenching.

Two interesting places amongst the beautiful, rolling countryside and definitely worth the trip.