For months my office has been used as a storage room. But now that it’s painted prettily, I’ve been cleaning it, with help from my writing partners.

Most of you probably didn’t realize I had writing partners. Yep, that’s right. When I’m in my office writing away, my writing partners are here, ready to help plot and share ideas. And when I need a break they’re ready to play or take a walk. Would you like to meet them? Of course you would! 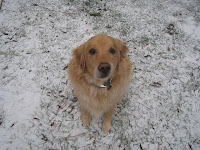 Jack’s our super sweet Golden Retriever who showed up at our house in Michigan about six years ago. He was only around two, still slightly a puppy, and liked to chew, as our couch can attest. I know you might think you have the best dog, but sorry, Jack wins hands down. He’s never once snapped at anyone, even when my son crawled all over him, pulled his fur and ears. He’s the sweetest dog and loves to be with the family. He’s more human than most people and god forbid we don’t take him with when we go somewhere, or we’ll come home to a pouting pup. This picture was taken just the other day when we got a dusting of snow. The snow has shut down our southern schools, much to the delight of my son. Coming from the North where blizzards aren’t uncommon, I find the excitement rather amusing.

Nealy, or Kitty, as we call her, came to us when a coworker could no longer keep her and was going to put her down. She’s such a sweet cat. She’s not as friendly as Jack and she pretty much can’t stand the boys. In fact she’ll often look at me like, “Why do you let them in the house?” We have our routine. She waits in the morning until my son goes to school then comes out of hiding. Now that I’m in my office, or the girl’s room, as she seems to think of it, she is m 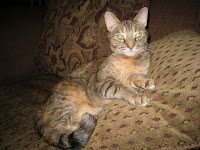 uch more relaxed. Her food is in here, her bed is on my desk, within easy reach. When she wants attention, she’ll either stand on my computer, blocking the screen, or when she’s on the floor she’ll reach up and tap me with her paw. She loves playing with my knitting needles, which is about as much action as they’ve gotten now that Christmas is over.

They’re my little furry writing partners and they fit quite nicely in my office. If you get a package from me, you’ll have to excuse the dog/cat hair stuck to the tape. 😉

Anyway, just wanted to introduce you to the family pets. We also have two goldfish, one that miraculously came back from the dead when my husband dropped him down the sink, but that’s another story for another day. What about you? Any pets you want to share?